Review - Blonde With A Wand 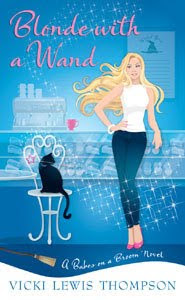 Anica Reaves is crazy about Jasper Danes, but she's not so sure he'll feel the same way about her once she tells him she's a witch. After all, the last guy she revealed that secret to ran like a bat out of hell. But Anica insists on honesty with any man she's involved with. But during her dinner date with Jasper, Anica discovers he's been less than honest with her. Unfortunately, her temper gets the best of her and she zaps Jasper with her wand turning him into a cat. Because she uses her magic in a negative way against another, Anica is stripped of her powers. How in the world will she remove the hex now?

Jasper thinks his date with Anica is going perfectly and plans for tonight to be "the night", but when Anica returns from the ladies' room, her demeanor has changed from affection to disdain. Things don't improve as they are walking toward Anica's apartment, and Jasper foolishly thinks he can thaw Anica's iciness with a little seduction and a kiss. The next thing he knows, he's sitting under his pile of clothes, transformed into one very ticked off cat. It gives a whole new meaning to "date from hell!"

Anica wrangles a hissing and spitting Jasper and takes him back to her apartment, anxious to hide her magic faux pas from everyone. She knows if the Wizard Council finds out what she's done, she'll be in deep woo woo. Desperate for help, Anica calls her sister, Lily, hoping that she might be able to help find a way to reverse the spell. Anica has always been the "responsible" sister and Lily's the "wild one", so it irks Anica to have screwed up in such a huge way. Unfortunately, nothing Lily does with a wave of her wand helps Jasper, and Anica can't find any counter-spell in any of her magic tomes. Help comes from Big Knob, Indiana in the form of Dorcas and Ambrose, the magical matchmakers from Thompson's popular Hex Series.

Jasper is counting the minutes until he turns back into a man, and he can get even with Anica. But the longer he spends with her, the more he wants her. Every night he becomes human, but returns to his feline form again in the morning. But those hours as a man only serve to stir up the chemistry between him and Anica, and Jasper thinks that maybe being with this sexy witch isn't such a bad deal after all. He even learns to enjoy the simplicity of his life as a cat:

He was now a champion nap-taker, too, and he had to acknowledge that naps lowered his stress levels. He also had meditation skills to rival the Dalai Lama and the patience of...well, of a saint. As a man he used to sit and drum his fingers on the desk while his computer booted up. Now he simply sat and waited.

....He realized with some surprise that there were things he'd miss about being a cat.

Anica and Jasper are about to be tested in ways they never dreamed, and they will have to decide if they are willing to sacrifice the most precious magic of all.....love.

Vicki Lewis Thompson has given her readers another fun and whimsical series. If you are a fan of Bewitched and witch Samantha Stevens and the mayhem her magic sometimes caused with her human husband, then you'll love Blonde With A Wand, the first book in Thompson's Babes on Brooms Series. Jasper's close encounter with Anica's nosy neighbor who wants to take him to the vet to be neutered had me laughing out loud.

The second book in the series, Chick With A Charm, will be released in March. It's all about Lily, Anica's sister. No doubt she's going to make Anica's magical slip up look minor in comparison. Treat yourself to a little magic and a lot of laughter and read Blonde With A Wand.