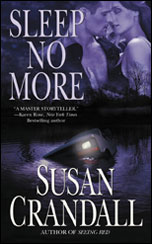 I like a good night’s sleep and am usually in dreamland by 11:30 or so. One of the few things that will keep me up later than that is a good book. The most recent one to accomplish this, Sleep No More, (seems fitting, doesn’t it?) kept me eagerly turning the pages until I reached it’s conclusion in the wee hours of the morning.

The night was always Abby Whitman’s enemy. As a young girl she walked in her sleep, and one night, she started a fire that scarred her sister for life and left Abby with unbearable guilt…and a loneliness that echoes within her.

Abby Whitman is a gifted floral designer living in a small southern town. She’s warm, generous, well-liked and lives every day with the guilt of what she did as a young child. It’s why she lives alone in the shadow of the burned-out ruins of her family home, why she’s forsaken dreams of a husband, a family. Even though she hasn’t walked in her sleep since she was a child, the fear that it could all start again never leaves her and Abby will do anything to make sure she never harms anyone again. But at 3:00am one morning Abby realizes she was never in control of her sleepwalking. She awakens in her partially submerged van, with no recollection of how she got there, and realizes she was driving while asleep. But Abby’s nightmare is just beginning for she wasn’t the only person involved in the accident. A mangled motorcycle and the dead body of the nineteen-year-old son of a Senator are found nearby.

Dr. Jason Coble is a small-town psychiatrist with a bitter, alcoholic ex-wife, a confused young daughter and a teen step-son filled with frustration and fear. His days are spent treating patients, trying to keep his ex sober and helping his children accept that their parents will never be together again. With all that baggage, it’s certainly understandable that he wouldn’t be anxious to start another relationship but, when he has a chance encounter with Abby, he finds himself drawn to her.

Abby is devastated by the knowledge that her sleepwalking has taken a life, even though she has no recollection of the accident. But then the evidence points to a third person being at the scene and Abby begins receiving anonymous telephone calls, followed by vandalism on her property that escalates to threats against her life. She begins to wonder what really happened that night and turns to the only person she believes can help her: Dr. Jason Coble. Will trusting Jason bring her the love she has always denied herself or will putting her safety in his hands be the worst mistake of her life?

Crandall has written another masterful mystery, filled with twists and turns, that had me glued to the pages from beginning to end. Her descriptions fill the reader with a sense of place:

Steadying herself with one hand on the open van door, she pulled her left foot out of the muck and her shoe was sucked off her foot.

Don't think of the snakes.

Slowly, she put her bare foot on the marsh bottom again.

She took another step that cost her right shoe. One more step and she wouldn't be able to steady herself with the van's door any longer. No choice but to go forward.

Fighting the drag of the water and the pull of the mud, it was slow going. The more she tried to not think of all the things that lived in marshes and ponds, the more snakes and gators dominated her mind.

There! Did she hear something? She halted and held her breath.

Definitely. A rustling in the vegetation. The lap of a water ripple against something solid.

She held perfectly still until the chattering of her teeth told her she had to move - take her chances of attracting a gator or die of hypothermia.

There is no gator. Get moving.

Almost to the first scrubby tree. Just a few more steps - and she didn't hear a gator thrashing behind her.

Gators don't thrash until they have you -

Something bumped against her leg.

I don't know about you but, if something had bumped my leg at that point in the story you would have had to peel me off the ceiling.

Crandall's characters are fully developed and the situations in which she places them, realistic and believable. There are secondary characters and sub-plots that may seem a bit confusing, or superfluous, at first but their importance becomes evident in time. Two secondary characters that I think are exceptionally well-drawn are Maggie, a young woman with Down Syndrome and Bryce, Jason’s 17-year-old stepson.

This is a terrific romantic suspense story that verges close to psychological thriller. Though there is a romance with a happy ending, I would have enjoyed a bit more attention to the emotional, and physical, growth of the relationship between Abby and Jason. I have no complaints about the suspense aspect of this story. It's tightly crafted, with a plot that flows smoothly and a mystery that kept me guessing well into the book. Even after I figured out “who-done-it”, I still had no idea how the rest of the story would play out. Sleep No More is an edge-of-the-seat thriller that kept me riveted from beginning to end.