Review - The School of Essential Ingredients

Every so often a book comes along that makes all other books pale in comparison, that quite simply leaves you in awe. For me, The School of Essential Ingredients is that book. Erica Bauermeister's debut novel is a feast for the senses and the soul, filled with lush and evocative prose that will leave readers eager for a second helping.

Lillian's father left when she was very young. Stunned by his departure, Lillian's mother copes by escaping with the endless procession of books that she reads. Lillian is left to deal with household chores, and she soon discovers a love of cooking. She adores experimenting and creating recipes, and she somehow thinks that she can reach her mother through food. With the help of Abuelita, the owner of a small grocery store, Lillian makes a special concoction for her mother's coffee to help her "remember what she lost and want it again."

The chocolate made a rough sound as it brushed across the fine section of the grater, falling in soft clouds onto the counter, releasing the scent of dusty back rooms filled with bittersweet chocolate and old love letters, the bottom drawers of antique desks and the last leaves of autumn, almonds and cinnamon and sugar.

Years later, Lillian is a restaurant owner and once a month on Monday night, she hosts a cooking class, The School of Essential Ingredients. The students gather to learn more about the culinary arts, but they discover so much more. There's Claire, a young wife and mother, longing to rediscover herself; Helen and Carl, a long-time married couple whose relationship hides surprising secrets; Antonia, a kitchen designer who is trying to transition from life in her native Italy; Tom, a lawyer whose life is colored by loss; Isabelle, an elderly woman coping with dementia; Chloe, a young woman who is struggling to find her identity; and Ian, a software engineer, endeavoring to find his creative side.

Each character's story is emotionally rich and Bauermeister's delicious prose is as sensuous and succulent as the dishes created in Lillian's kitchen. You can practically taste each savory bite.

"Now we'll try some prosciutto with it." She took a piece of melon in her fingers, wrapped it with a translucent slice of pink meat, and motioned for him to open his mouth. The meat was a whisper of salt against the dense, sweet fruit. It felt like summer in a hot land, the smooth skin in the curve between Charlie's strong thumb and index finger. The wine afterward was crisp, like coming to the surface of water to breathe.

I fell in love with The School of Essential Ingredients, wishing I could be a student of Lillian's and immerse myself in the heavenly aromas and mouthwatering morsels found in her kitchen. Give yourself a gift for the new year and spend time with Lillian and her proteges and fall in love with this superbly written masterpiece. Bon Appetit.

One lucky commenter will win a hardback copy of The School of Essential Ingredients.


Note:  The trade paperback version of this book was released January 5, 2010 with a lovely new cover. (shown below) 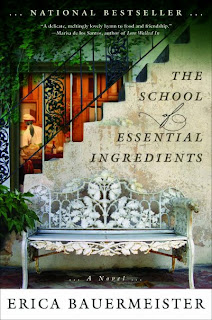