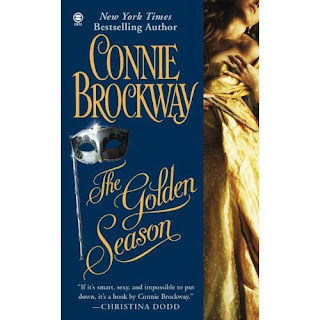 The Golden Season is my very first Connie Brockway book. Yes, you read that correctly. I don’t know why I haven’t read her books before (except to say that I already read a lot of authors), but I am so glad I have now. Her writing is exquisite and the romance is one of the most beautiful I’ve read in a long time.

Lady Lydia Eastlake is quite the celebrity in Regency London. Yes, she is extremely beautiful. Yes, she is insanely wealthy. And yes, she is the epitome of respectability. But it’s the combination of those plus her independence that makes her so popular. Born to parents whose marriage was met with scandal (it was considered taboo by many for a widow to marry her brother-in-law), Lydia enjoyed an extravagant, globe-trotting lifestyle during her childhood. Upon her parents’ sudden death, Lydia came to England to live with a guardian until her godmother, Eleanor, Duchess of Grenville, took her under her wing. From the moment she debuted, Lydia took London by storm and continues to do so. And then one day while meeting with her banker, Lydia finds out that she is bankrupt.

“No,” she said, shaking her head. “I’m sorry. I can’t be poor. Too many people depend on me. Craftsman and merchants, artisans and wine brokers, tradesmen and other such businesses.”

This was doing it a bit brown. “They do have other clients,” he said.

She frowned, more annoyed than offended. “I don’t think you properly appreciate my position, Terwilliger. I am not just another member of the ton. I am”—she cast about for the appropriate word—“I am an industry.”

Was she twitting him? She’d always had an odd sense of humor.

“Terwilliger,” she said with a touch of exasperation, “I dine at an establishment and its reputation is made. I import a certain varietal wine for a dinner party and within a week the vintner has orders for the next five years and the vineyard where the wine comes from is secure for a decade. I wear a perfume and not only is that fragrance’s popularity guaranteed, but the perfumery’s, too. The same can be said of the mill that produces the silk for my gowns, the musician I hire for an afternoon salon, the composer I employ to write a new sonata ...” She trailed off, studying him to gauge whether he understood.

He recognized in surprise that she was right and once again was visited by the uncomfortable notion that behind all her frivolity, Lady Lydia understood very well the world in which she lived. She was an industry. True, the ton was filled with fashion makers, but no one save Beau Brummell had captivated the public imagination like Lady Lydia Eastlake. She drew crowds wherever she went. People stood in line outside the shops she frequented and lined Rotten Row each afternoon hoping to get a glimpse of her riding past in her barouche.

In this passage, Lydia comes across as being a bit vane and a touch spoiled, but I see it more as confidence. Even when she behaves this way, she is still thinking of others. The fact that she is so genuine and knows exactly who she is made me appreciate and like her right from the start. She acts the way she does because that’s what she’s always known and what has always been expected of her. So, Lydia’s choices are pretty clear: either live off of a pittance and keep her beloved independence or marry a wealthy man and live comfortably without that freedom. As expected, Lydia chooses the latter.

Captain Edward “Ned” Lockton, recently retired from His Majesty’s naval service, comes home to Josten Hall to be with his family in the ancestral home he has always loved. Home only a week and Ned is informed by his brother the earl that the family’s fortune is gone and that Ned is to find an heiress and marry her as soon as possible. Ned goes to London, not because he is forced to or shamed into going, but because he sincerely loves his family in spite of their spoiled and self-indulgent ways. He likes to keep the peace. From the moment he first matches wits with Lydia, Ned sets out to win her. Sigh. He is sensible and always composed (he reminded me a bit of Mr. Darcy) and while it takes a little while for Lydia to crack his reserve, the reader is left with no doubt as to how he feels (one thing in particular that he does made me cry!). And the fact that Lydia is enormously wealthy pretty much seals the deal. But how will each take the news that the other does not have what they require in a spouse?

I loved, loved, LOVED this story! It has been a while since I’ve read a historical romance that was so well written and thoroughly blew me away. Seriously, I could not put it down. Everything about it was simply perfect; from the levelheaded, honorable Ned to the self-assured, compassionate Lydia; from the quirky but charming secondary characters to the slow-building romance sprinkled with tension, which when left in Ms. Brockway’s adept hands, unfolded beautifully. This may be my first Brockway book, but it isn’t going to be my last. I’ve already ordered several from her backlist, including so many romance readers’ top ten all-time favorite, All Through the Night. So, if you couldn’t already tell, I highly recommend The Golden Season. You don’t want to miss it!