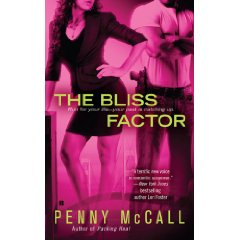 Life is not bliss when buttoned up accountant, Rae Blissfield, formerly known as Sunshine Bliss, finds herself once again thrown into the chaos of her parents' life on the Renaissance Faire circuit, the same life Rae happily left behind the minute she turned 18. Though she loves her parents dearly, she doesn't share their sense of adventure or love of life on the road. All Rae wants is to make partner at the accounting firm where she works and enjoy a financially secure, comfortable life but all that comfort and security gets tossed out the window when the Ren Faire rolls into town, she receives an urgent message from her parents and comes face to face with temptation personified.

She lifted onto her toes and managed to spy a carefully banked fire within a shed-like opening, decorated with intricate metalwork pieces and medieval weaponry, and filled with a half-naked man. A tall, bare-chested, rugged-looking man with dark, shoulder-length hair and arresting blue eyes. Of course, it took her a minute to get to the eyes. No sense rushing things, she thought, dropping her gaze to the dirt floor of the shed and working her way up over knee-high boots with homespun britches tucked into them. He wore a leather apron over the britches - disappointingly - but the scenery improved from there. Six-pack abs, pecs the size of dinner plates, and biceps she couldn't have spanned with both hands. His neck was corded, his face was square-jawed, and then there were his eyes, bright blue and laser sharp against his black hair and tanned skin.

He looked up, their gazes met, and Rae felt it all the way to her toes, where it boomeranged back up and clamored for notice in body parts she ought not to be thinking about. Those body parts would only get her in trouble...

Somebody is trying to kill undercover FBI Agent, Connor Larkin. Unfortunately, for Connor, not only does he not know who wants to kill him or why, thanks to being bashed on the head, he doesn't even know who he is. He doesn't remember that he's been traveling undercover with the Ren Faire while trying to identify the source of a counterfeiting ring. Nor is he familiar with any modern conveniences, such as cars, televisions, guns or fast food. In fact, perhaps due to the fact that he regained consciousness in the middle of a Renaissance Faire, Connor believes that he's an armorer living in medieval England which leads to plenty of entertaining dialogue between medieval Connor and thoroughly modern Rae, such as the following:

"Did you say something?"
Conn smiled a little. "That was my stomach growling."
"Missed lunch in all the excitement, huh?"
"I rarely eat when there are crowds."
Rae glanced over at him. "Why not?"
"Women," Conn said, "then men, then trouble."
"Come again?"
He frowned. "When was the first time, and how did I miss it?"

Guilted by her parents into taking Connor home with her, to keep him safe, Rae soon finds her life turned topsy-turvy. Her bosses are upset that she's not coming into the office, three unemployed auto workers who act more like The Three Stooges than the Sopranos are trying to kill Connor and getting more proficient with each attempt and she's beginning to suspect that her parents are in the middle of something not quite legal. And, if that isn't enough, she's stuck babysitting a tall, dark and hunky guy who threatens to lay siege to both her body and her heart.

McCall has written a fast-paced romantic suspense story with likeable characters, plenty of action and laugh-out-loud humor. I especially enjoyed medieval Connor. The author strikes just the right note to bring forth the emotional simplicity of a poor medieval blacksmith while maintaining the hilarious situations that occur by tossing him into the 21st century without turning him into a caricature. And, in Rae, she has created a heroine who, after spending her entire adult life running away from her past and chasing what she thinks is her future, discovers that it may not be what she wants...or needs. A terrific group of secondary characters round out the cast and contribute to some of the best lines and scenes in the book, many of which had me rolling with laughter. I thoroughly enjoyed The Bliss Factor and look forward to reading more books from Ms. McCall.