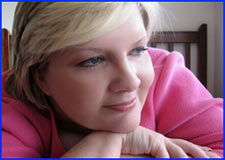 Jo Davis was a public school teacher for sixteen years before leaving to pursue her dream of being a full-time writer. She writes romantic suspense and erotica for NAL, has been a finalist for the Colorado Romance Writers Award of Excellence, has won the HOLT Medallion Award of Merit, and has had one of her books optioned as a major motion picture. Check out her website for more information about Jo and her books.

Welcome to The Romance Dish, Jo!  We’re delighted to have you with us today.  HIDDEN FIRE (*love* that cover!), the third book in your Firefighters of Station Five series was recently released. Will you tell us a bit about the story?
Hello, ladies! I’m thrilled to be here at the Romance Dish! Thanks so much for inviting me. Without further ado… 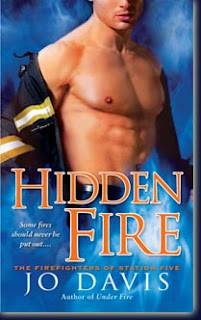 Station Five’s bad boy, Julian Salvatore, has met his match in cool attorney Grace McKenna. When they first met in TRIAL BY FIRE, Jules fell for her and began his campaign to win her over. Grace, however, is well aware of his rep as a ladies’ man and isn’t willing to become a notch on his bedpost. She also senses that his behavior is a coping mechanism he uses to hide some very heavy baggage, and shies from becoming too involved with a man who needs to be “fixed”. But her heart has little say in the matter when all her preconceived notions about him are shattered one by one, and she gradually learns there’s a heart of gold beating underneath his unrepentant, sexy exterior. Before they can find happiness, however, the ghosts of his past must be put to rest…

Click here to read an excerpt from HIDDEN FIRE.


I fell in love with Jules. What woman doesn’t want to be *the one* to bring love and joy into a tormented romance hero’s life? Do you fall in love with your heroes? Is it hard to leave them behind once you’ve finished writing their stories?
Oh, yes, I definitely fall in love with my heroes! I especially fell for Julian, who had such a long way to go in healing emotionally. Saying goodbye to each one is always tough, which is part of the reason I love to write a series—I get to keep the guys around just a little longer. I hate goodbyes so much, I never type “The End” at the end of my manuscript before I turn it in! In my head I’m thinking, “But it’s not really the end, it’s only the beginning…”

I feel the same way!  I really hate saying goodbye to the characters of a much loved book.  I think that's why I'm such a fan of  the multi-book series.


The villains in this book are particularly heinous. How difficult is it to write a villain? As the creator, are you able to detach yourself from their crimes or are you thrown into the maelstrom?
I love writing villains, and my friends will tell you that’s because I have a warped, evil mind! I throw myself into the role, really getting into their heads, and it’s sometimes a scary place to be. But I’m fascinated by the psychology of the criminal mind, what makes him or her tick. I don’t just wing it, though. I have research books at my fingertips to consult and make sure the villain I’m creating is exhibiting the appropriate behaviors for his or her type of criminal. My premise for the killers in HIDDEN FIRE began with a question: What if, very early on, one victim escaped the grisly fate intended for him, and never knew it?

While researching for the villains in HIDDEN FIRE, I learned that it’s not uncommon for killers to work in pairs or teams, and I read several case studies that gave me goosebumps. Chilling, huh? Fact is always more stunning than fiction.


Your villains sure gave me goosebumps!
What’s next for the men and women from Station Five? 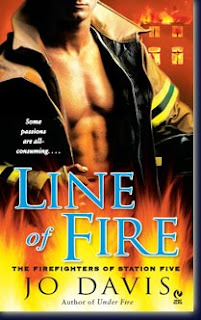 Tommy Skyler, the station’s youngest firefighter, will get his story, LINE OF FIRE, on May 4!   Ex-football hero Tommy will work hard to win his lady love, Shea Ford, who happens to be Detective Shane Ford’s twin. (And yes, fans of Shane, he has a meaty role and you’ll get to know a more personal side of him!) My readers have also been waiting for Captain Sean Tanner to cause a major train wreck, and in Tommy’s story, lives are changed forever. On the suspense side of things, an old title pops into my head that says it all: Something Wicked This Way Comes. Tommy’s story propels us headlong into Sean’s story, RIDE THE FIRE, which will be released in December. The end of Tommy’s story reveals a shocker that gave my editor the chills, and blows out of the water something readers thought they knew.

On top of that, the frightening thing is, what is coming to Sugarland can happen in any town, anywhere. Sean will have to put the past behind him once and for all if he hopes to avert evil and win the woman he loves…

Click here to read an excerpt from LINE OF FIRE.


Oh man, talk about a teaser!  I can't wait to get my hands on this book!


Jo, you recently hinted (at Romance Bandits) that we might see a new series down the road starring some secondary characters from the Station Five books. Any news you care to share on that? I can’t be the only one who wants to know more about Tonio and Shane!
I don’t have any real news yet and can’t say too much about it, but I’m working on a new romantic suspense series proposal that will make my readers very happy should it be accepted by my publisher. The new series will be more gritty, while featuring those melt-your-panties heroes we love! All I can say is I very much hope to be able to give Detective Shane Ford’s and Anthony (Tonio) Salvatore’s stories to my readers.


We're hoping for the same thing! 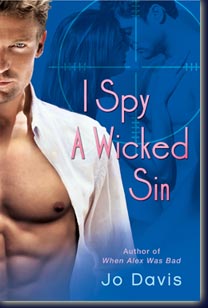 I SPY A WICKED SIN features hero Jude St. Laurent, who’s blind and suffering from huge holes in his memory. Worse, he has no clue he’s a former assassin who’s been blamed for the theft of a stolen weapon of mass destruction and is marked for death. And our heroine, fellow agent Lily Vale, has been sent to eliminate him… I hope my readers enjoy Jude’s story!

Click here to read an excerpt from I SPY A WICKED SIN.


You certainly have been blessed with some lovely covers, Jo. *grin*  I'm looking forward to reading I SPY A WICKED SIN.  It sounds fascinating.

Thanks so much for visiting with us today.  I'm sure our readers have questions for you but is there anything you'd like to ask them?
I’m curious to know if there’s a series out there that readers would love to devour, but isn’t being done right now. Answer this: I’d LOVE to read a series about _____, featuring heroes that are _____. Let your imagination run wild!

Jo has generously offered to send copies of HIDDEN FIRE and  I SPY A WICKED SIN to two lucky commenters, chosen at random.  Each of the winners will receive both books.