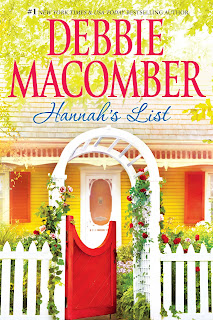 Dr. Michael Everett has been a widower for exactly one year when he receives a letter from his wife Hannah thanking him for the love and happiness he gave her and urging him to find someone with whom to share the rest of his life. Clearly Hannah knew her husband well. Prepared for his stubborn resistance to letting go of the life they shared, she assures him that a new love will not diminish his love for her and provides him with a short list of women she believes could make him happy: Winter Adams, Hannah’s cousin and chef and owner of the French Café on Blossom Street; Leanne Lancaster, Hannah’s oncology nurse; and Macy Roth, an artist and part-time model, who made Hannah laugh during the last months of her life when laughter was at a premium.

Michael is convinced he’s not ready to begin dating, but he can’t ignore Hannah’s last request or the persistent pushing of Ritchie, his best friend and Hannah’s brother, who, as the deliverer of Hannah’s letter, is the only one other than Michael himself who knows about the list. Over several months, Michael sees each of the women, sometimes in planned activities and sometimes in unavoidable encounters. From each one, he learns something about himself and about relationships. One of them teaches him to love again.

Hannah’s List takes Debbie Macomber fans to a familiar place, a warm and comfortable world where problems may be complicated but never insurmountable, where hope refuses to be silenced, and where wounded hearts heal. The characters are likeable, the setting is appealing, and the tone is sweet but never cloying. Some old friends from the Blossom Street series make appearances, but Michael’s story is tangential rather than interwoven with theirs. A reader can enjoy Hannah’s List without having read the other books.

Michael is a wonderfully drawn character. His struggle to let go of the wife he loves both in the months leading up to her death and in the grieving year that follows will strike home with those who have experienced similar bereavement. I especially liked his relationship with Ritchie and Ritchie’s family and with his office staff. I found the guilt and anger that were mixed with his grief realistic, particularly given his profession as a doctor who sees death as the enemy to be conquered. Some may think Hannah’s battle with stage four ovarian cancer is given short shrift, but this story is Michael’s rather than Hannah’s. It is the story of returning to a life fully lived rather than the story of confronting death.

The three women whose names comprise Hannah’s list are interesting in different ways. Winter is passionate about cooking and engaged in a stormy, on-again, off-again relationship with a Frenchman. Leanne is recently divorced, still conflicted about her feelings for her former husband and troubled by unanswered questions concerning his conviction for defrauding the hospital for which she works. Macy is a free spirit who adopts strays, four-legged and two-legged, and displays a surprising vulnerability.

The thing that kept Hannah’s List from being a five star read for me was the simplistic wrapping up of some quite complicated subplots. The premise of the list mandated that the stories of all three women be part of the larger picture, but in the process of telling three stories, Macomber dilutes the central love story and ends the others too quickly and too neatly. Nevertheless, Hannah’s List is another heartwarming tale from the pen of a writer who may well be the best in the business at giving readers sweet and tender stories of people they’d like to know.


Don't forget our contest to win a $25 Visa gift card and one of three copies of Hannah's List. Click here to enter the contest.   Entries will be accepted through Sunday, May 9th.
Posted by pjpuppymom at 6:31 AM