Review -- Never Less Than A Lady 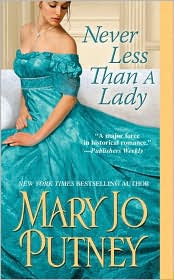 As the sole remaining heir to the Earl of Daventry, Alexander Randall knows his duty: find a wife and sire a son of his own. The perfect bride for a man in his position would be a biddable young girl of good breeding. But the woman who haunts his imagination is Julia Bancroft--a village midwife with a dark secret that thrusts her into Randall's protection.

Within the space of a day, Julia has been abducted by her first husband's cronies, rescued, and proposed to by a man she scarcely knows. Stranger still is her urge to say yes. A union with Alexander Randall could benefit them both, but Julia doubts she can ever trust her heart again, or the fervent desire Randall ignites. Yet perhaps only a Lost Lord can show a woman like Julia everything a true marriage can be. . .
Major Alexander Randall has been notified by his odious uncle that he is now the heir presumptive to Daventry and must sell his commission in the army and return home. It's time for him to find a suitable wife, settle down and produce an heir. But the only woman who interests him, who occupies his thoughts is Mrs. Julia Bancroft--widow, midwife and not exactly "proper" wife material. After Alex returns from the war and is in the country visiting friends, he learns that Julia has been kidnapped, and he races to rescue her.

Lady Julia has been hiding out for the last few years, assuming the identity of midwife Julia Bancroft, praying her father-in-law never finds her. Julia married her husband at the tender age of sixteen, never imagining the monster that lurked under his handsome visage. When he falls and hits his head during an argument with her and later dies, both Julia's father-in-law and father accuse her of murder. Cast out, she has no choice but to fashion a new life. But fate can be fickle, and her father-in-law eventually discovers her whereabouts and sends his henchmen to kidnap her.

After Alex rescues Julia, he discovers that she was married to his cousin, the bully who made his childhood a living hell. Alex proposes marriage--something he has secretly desired--in order to offer her protection from his uncle. Given Julia's experience with marriage, she is reluctant to say yes, but there is something about Alex that makes her trust him, so she agrees. Alex fears this could be a marriage in name only---at least for some time--due to the abuse that Julia suffered during her marriage to his cousin. Alex must patiently woo his new bride and earn her trust so that they might have a chance at real happiness.

"I think this is one of the main reasons people get married," Randall said reflectively. "For touch. For warmth and closeness. Passion is all very well, but it's brief. Affectionate touching can be done much more often."

Alex wants Julia with a passion he fears may frighten her. They each bear scars, both physical and emotional, which probably makes them ideal for one another.

A wounded spirit could ache far longer than physical injuries.

Julia is truly physically attracted to Alex, but is understandably wary of having a physical relationship with a man after the horror she endured with her husband. But Alex is loving, patient and willing to let Julia decide when she is ready to be his wife in more than just name.

For the space of perhaps two dozen heartbeats they held each other, adjusting both physically and mentally to the irrevocable change in their marriage. Then Julia raised her face into a kiss. She filled his senses with touch and taste and scent. His wife, the fulfillment he had longed for and feared he would never find.

Heartwarming, poignant and unbelievably romantic, Never Less Than A Lady will have you cheering for Julia and Alex and leave you smiling with satisfaction as you close the book. Ms. Putney has given her readers another treat with the second book of her Lost Lords series. It's not necessary to read the first book, Loving A Lost Lord. In fact, I did not, but I immediately purchased it when I finished Never Less Than A Lady. I can't wait to see which "Lost Lord" is the hero of Ms. Putney's next book!