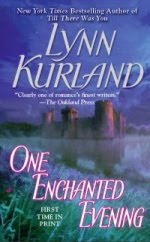 A duty-bound knight has taken on the task of rebuilding the most dilapidated castle in all of England.

A costume designer gets her chance to shine by showcasing her fairy- tale designs at an upscale party in an authentic medieval castle.

And the magic that whispers along the castle's hallways is about to orchestrate an improbable happily-ever-after.


Montgomery de Piaget is everything a knight should be: tall, handsome, honorable and chivalrous. His time is currently consumed with renovating Sedgwick, the castle his father has given him, which looks in danger of falling in on itself. If that wasn't trouble enough, his cousins who have been living in the keep while their father held it in trust for Montgomery, feel that he is the usurper and are bound and determined to make his life a living hell. In a family filled with "paranormal oddities", Montgomery could use a little bit of magic in his life.

Persephone "Pippa" Alexander loves the fairy tale element of medieval times, which is why she has made a career out of creating fanciful costumes to recreate that era. When she's invited to England--to her sister Tess's castle--to provide the costumes for a party and have her designs viewed (and hopefully loved) by a wealthy British aristocrat, Pippa jumps at the chance. Unfortunately, her flaky and uncommonly beautiful sister, Cinderella "Cindi" decides to tag along and play Fairy Queen at the party. Pippa could use a fairy godmother to help her out. Instead she literally falls through a time gate with her valium-popping sister and lands in the cesspit moat of Sedgwick. Not exactly the fairy tale she had in mind.

I love time travel romance, and Montgomery and Pippa were a delightful hero and heroine. Humorous, touching and full of fun, this tale was really entertaining. The only thing that kept me from giving it a higher rating was the fact that Ms. Kurland has characters from past books popping up here and there--I would have enjoyed the story more if I'd "known" everyone. I will have to glom her backlist to catch up with the rest of the de Piaget clan. They are too intriguing not to "check out." *g*

Montgomery and Pippa travel back and forth in time, learning about each other and their respective centuries. They are truly a match made in heaven, no matter if they live in the 13th or the 21st century.


"You decide what your perfect day might contain and I'll do my best to fit it all into this afternoon. Then I think we should perhaps retreat somewhere quiet and discuss what our perfect future might contain." He hesitated, then cast caution to the wind. "And where that future might be carried out."


Now that's the stuff of fairy tales. Treat yourself to a little fairy tale magic and have One Enchanted Evening.