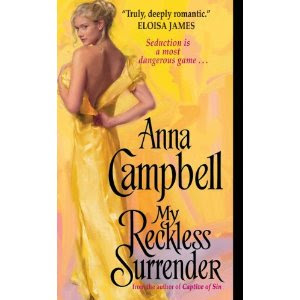 Tarquin Vale, Earl of Ashcroft, has the reputation of being a man who can’t say no to the women, from aristocrats to courtesans, who are eager to share his bed. Diana Carrick counts on that reputation when she approaches him and boldly declares she wants him as her lover. His initial refusal is just the first of a series of surprises as Diana discovers that Vale, reformist politician, collector of antiquities, and wounded soul, is immeasurably more complicated than the debauched lord she thought him to be.

I’ll be candid and admit up front that I’m an Anna Campbell fan. I delayed reading Claiming the Courtesan because all the buzz about it told me that it was darker and hotter than most of the books I read, but once I read it, AC went on my auto-buy list. Her books are dark, but they are not lightless; they are hot, but she never forgets that her characters have minds, hearts, and souls as well as bodies. There is angst and anguish a plenty in My Reckless Surrender, but there are also some delightfully playful exchanges between Vale and Diana. The following is one of my favorite bits from the book:

Laughter bubbled up like a pure stream. Strangely, when this was over, she’d miss the laughter as much as the passion.

Then she remembered the taste of his mouth. The hot saltiness of his tongue. The deep thrust of his body.

Maybe not quite as much.

Vale may be my favorite of Campbell’s heroes, and that’s saying a great deal because I have loved every one of her heroes. But Vale has all the essential qualities I want in my romance heroes: intelligence, humor, integrity, and a great capacity for both tenderness and passion. I’m less enthusiastic about Diana. I felt sympathy for her, especially toward the end of the book, but her motive for choosing to do something that fills her with shame even before she falls in love with Vale never seems fully adequate to me. That quality and a feeling that the denouement is rushed account for the half star deduction. But the strengths of MRS far outweigh these flaws. The lush prose, the multi-dimensional characters, the conviction that the H/H belong together for a lifetime—these are the qualities that made My Reckless Surrender eminently readable, memorable, and satisfying. I’m left with another keeper and a question: How long do I have to wait for Anna Campbell’s next Regency noir?