Your Horse or Mine? 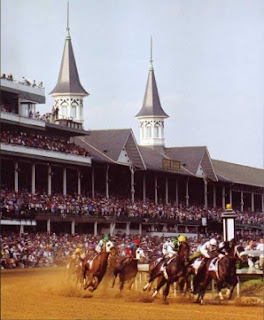 It's not a national holiday but those living in the state of Kentucky may argue that it should be.  Today is the first Saturday in May - the day when women traditionally don outrageously huge hats, sip Mint Juleps and make discreet wagers. When men discuss bloodlines, training techniques and race records.  Today, for the 136th time, the eyes of the horse-loving world will turn to Churchill Downs in Louisville, Kentucky and the running of the first jewel in horse racing's Triple Crown:  the Kentucky Derby. 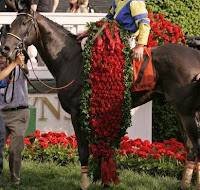 I've never lived in Kentucky, nor have I owned a horse, but I love watching the Derby.  I love its traditions, from the stirring singing of the Stephen Foster classic, My Old Kentucky Home when the horses enter the track (I cry every single time) to the garland of roses placed across the winning horse's back.  The roses made their Derby debut in 1896, when an arrangement of white and pink roses was presented to the winner.  Today, the red rose is the official flower of the Derby and the garland consists of more than 400 red roses.

Then there's that trophy.  Made of solid 14-karat gold, with an 18-karat gold horse and rider atop and set upon a jade base, the trophy has been awarded annually since 1924 to the owner of the winning horse.  While the horse and rider are cast from molds, the rest of the trophy is handcrafted during a process that takes hundreds of hours. 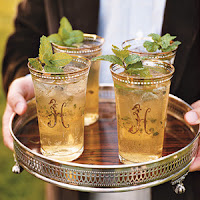 The Mint Julep has been the official drink of the Kentucky Derby for almost 100 years and, let me tell you, there's a whole lot of sippin' going on during Derby Week!  There are an estimated 120,000 Mint Juleps served at Churchill Downs alone over Derby Weekend.  Of course, you don't have to go all the way to Kentucky to try one.  Here's a recipe from Early Times Kentucky Whiskey, the provider of the "Official" Mint Julep of the Derby.

Make a simple syrup by boiling sugar and water together for five minutes. Cool and place in a covered container with six or eight sprigs of fresh mint, then refrigerate overnight. Make one julep at a time by filling a julep cup with crushed ice, adding one tablespoon mint syrup and two ounces of Early Times Kentucky Whisky. Stir rapidly with a spoon to frost the outside of the cup. Garnish with a sprig of fresh mint.


But while the hats, the music, and the lovely refreshments are important parts of Derby tradition, it's the horses that hold center stage.  Beautiful, disciplined, finely-tuned three-year-old athletes at the top of their game, they command the attention of every person there from their first step onto the track .


The race they will run is 1-1/4 miles and you better not blink or you'll miss it.  The record for the fastest Derby time has stood since 1973 when the legendary Triple Crown winner, Secretariat ran it in 1 minute 59-2/5 seconds.  He was an amazing horse!  The Triple Crown, for you non-horse people, is awarded to a horse who wins the three premier horse races in the United States - The Kentucky Derby, The Preakness and The Belmont Stakes - in the same year.  It's only been done eleven times since 1919 and hasn't been accomplished since Affirmed won it in 1978.

Twenty horses will take to the track today to race for the first jewel in the Triple Crown.  Will you be watching?  Have you picked a favorite?  I have a friend who knows all the stats on each horse and jockey and uses a scientific method (that leaves me totally confused) to select his favorites.  Another friend chooses her favorites based on the horse's name.  Still another picks her favorite based on the color of the jockey's silks.  Me?  I use a combination of the three.  It's worked...once or twice...but I have fun doing it and that's really all that matters to me.   Here are my favorite and long shot picks for this year's Derby.


Lookin At Lucky:  I like his name and his trainer, Bob Baffert and his odds are great at 3-1.

Paddy O'Prado:  How can I not love a horse with an Irish name and owned by Donegal Racing?  He's a long shot at 20-1 but he's been running really fast and I like his jockey, Kent Desormeaux.  I wouldn't count him out.

Okay, now it's your turn.  Will you be watching today's Derby?  Have you ever attended the Derby in person or been to a Derby party?  Tried your hand at sipping (or making) a Mint Julep?   Who's your favorite to win today's race? If you live outside the U.S., tell us about the premier horse races in your country!

One lucky commenter, randomly selected, will receive a signed set of Elizabeth Bevarly's Derby Trilogy, stories set in her hometown of Louisville, Kentucky - site of the Kentucky Derby.  The books in the trilogy are Fast & Loose, Neck & Neck and Ready & Willing.  Good luck!