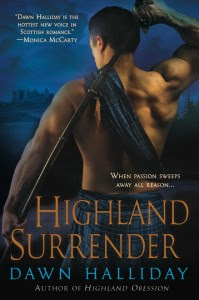 
Determined to put his roguish past behind him and settle down into respectable domesticity, the Earl of Camdonn arranges to marry the very proper Lady Elizabeth. But when an accident lands the earl in the expert hands of a beautiful Highland medicine woman, all well-laid plans are thrown to the wind--and, just as in the old days, his passions run high.

Like all the women in her family, Ceana MacNab has terrible luck with men. Resigning herself to the healing arts, she has steeled her heart against love. But mischievous fate has other ideas when it sends Cam her way. And even though he's a well-bred earl--and Ceana a lowborn Highlander--their all-consuming passion may lead the way to lasting bliss.


When Cam and Elizabeth are waylaid by highwaymen on the way to his estate, Cam manages to defend Elizabeth, but he is wounded in the attack. He is discovered by Ceana, who takes him to her cottage so she can heal his wound. Despite the fact that he is delirious with pain, Cam is instantly attracted to Ceana, and the feeling is entirely mutual. All of Cam's good intentions of being a gentleman and faithful to Lady Elizabeth disappear when he is with Ceana--his heart overrules his head.

Ceana is used to being on her own. Although she has had lovers, her grandmother and mother hammered the idea home that "MacNab women never marry." So she has resigned herself to spending her life alone. But when Cam literally stumbles into her life, her heart tells a different story. Passion flares hot between them, but aside from smoldering glances and stolen kisses, Ceana refuses to let things go further with Cam. As soon as he is physically able, Cam returns to Camdonn Castle, and he asks Ceana to go with him to continue to care for his wound. After all, what could a few days hurt? But time only makes their feelings grow, as well as Ceana's fears.


"This is where you belong," he said in a growling whisper. "Where I belong."

Cam was a dreamer, she realized as she gazed down at his bonny face. Like most gentlemen, he attempted to make rational, wise decisions based on his status in society, but when his emotions came into play, he lost that ability. He clung tenaciously to feeling and desire.

Somehow, he'd engaged that part of her too. A shudder of panic rippled through her.


Lady Elizabeth is the proper English wife that Cam chooses to help him repair his reputation. But she is much more than meets the eye. Most English misses would faint in horror after being set upon by highwayman, but Elizabeth just picks herself up, literally, only to come face to face with a tall, dark and delicious Highlander. Robert MacLean is the stable master at Castle Camdonn and Ceana's lover, but he is thunderstruck when he lays eyes on Elizabeth. It doesn't matter that they are as opposite as two people can be. They each harbor deep secrets and dark passion, things they only freely express with each other.

"You saw a haughty, spoiled girl. Someone who thought more highly of herself that she should."

He firmed his fingers beneath her chin. "Aye, I saw all that. But I saw more."

"Even you know that is a lie," he murmured.

Her expression turned soft. Vulnerable. "What else did you see?"


Two couples fighting the inevitable, a touch of mystery and love scenes hot enough to set the pages on fire. Highland Surrender is the perfect escape. So if sexy Highlanders ring your chimes (oh, boy, do they ever!) then this is your kind of book!