Heaven Is a New C.S. Harris! 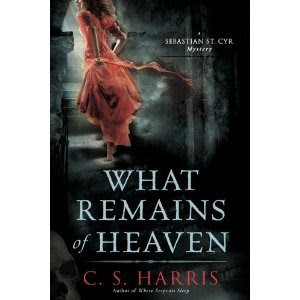 Oh, I do love a good tortured hero!

Yeah, I know, BIG surprise in that announcement.

In 1812, Sebastian has returned from soldiering against Napoleon in the Iberian Peninsula and now occupies his time accepting commissions to solve murders that threaten scandal for those in power. He's a vivid mixture of the man of action and the man of intellect. Not only that, but he's gifted with preternaturally good hearing and sight, especially in the dark so there's a slightly other-worldly quality to him.

This is the fifth book in the series (I'd strongly advise reading the books in order - C.S. Harris does a marvelous job of timing her revelations for maximum impact). Through the first four books, WHAT ANGELS FEAR, WHEN GODS DIE, WHY MERMAIDS SING and WHERE SERPENTS SLEEP (which I think might be my favorite so far although they're all wonderful), we've watched Sebastian battle with the dark legacies of war, requited but forbidden love for Irish actress Kat Boleyn, a prickly relationship with his father, the mysterious disappearance of his mother, a growing but difficult association with bluestocking Hero Jarvis, daughter of the man Sebastian considers an enemy. And there's more! This is a man who got in first in the line that said 'trouble'!

With every book, complications build on past difficulties until you just want to offer poor old Sebastian a cup of tea and a nice lie-down. But of course, he's a heroic type so he never DOES lie down. He just keeps fighting for justice, often against the most powerful elements in a society with very little concern for people like fallen women or lower-class orphans. Sebastian's immediate, clear-eyed empathy with people from all walks of life is among his most attractive qualities. Actually he's a man overflowing with attractive qualities. I love to read about a hero who is almost super-humanly intelligent but I also love his bravery and his stoicism and his dogged determination to see right done, no matter what it costs him. He's complex, he's principled, he's daring, he's passionate, he's unorthodox. Not only that, he possesses a dry wit that enlivens the stories and adds a glimmer of light to what is sometimes a very dark landscape indeed.

The books are rich in beautifully drawn secondary characters. Among my favorites are Tom, the orphaned, smart-mouthed guttersnipe who Sebastian employs as his tiger and Paul Gibson, the one-legged war veteran who can discern a dead body's secrets with his arcane medical knowledge. Readers have strong allegiances to the two women in Sebastian's life too - you're either in Team Hero or Team Kat.

I know I've spent an age raving about Sebastian (mostly because I have a big crush on him, LOL!). Partly that's because if you haven't read the earlier books, I don't want to spoil the surprises in this story - and believe me, it's as rife with revelations and switches and betrayals and suspense and mysteries as all the other books. When the Bishop of London, a man touted as the next Archbishop of Canterbury, is discovered murdered in a crypt and next to him is another body, murdered a generation before, the current archbishop calls Sebastian in to investigate. This strange event sets off a chain of violent, dramatic and dangerous events that culminate in a breathtaking climax. I sat up all night reading this book. I suspect you will too!

If you've read the other St. Cyr books, you've probably already got this one so I'm preaching to the converted. If you haven't, I'd recommend reading WHAT ANGELS FEAR, the first one, and then I bet you devour the rest of the series. This book ends on a cliffhanger in Sebastian's private life - I can't wait to get my hot little hands on the next installment!
Posted by Anna Campbell at 12:01 AM