I'm delighted to welcome back to The Romance Dish one of my favorite authors, and people, Christine Wells.  Christine is a Regency historical romance author who is quickly making her mark.  Her debut book, SCANDAL'S DAUGHTER, won the 2006 RWA Golden Heart.  Her second book, THE DANGEROUS DUKE, was a 2009 RITA finalist and her third book, WICKED LITTLE GAME was a RT Magazine 2009 finalist for "Best Sensual Historical Romance." Her current release, SWEETEST LITTLE SIN, brings us the much-anticipated story of Louisa and Jardine.   Released May 4th, SWEETEST LITTLE SIN is already raking in accolades, including a TOP PICK review from RT Magazine and 4-1/2 Stars from The Romance Dish. Read Andrea's review here.  When not writing some of my favorite books, Christine is a busy wife and mother of two sons as well as a regular blogger at Romance Bandits.  Please join me in giving her a warm welcome to The Romance Dish!
~PJ

People often ask writers where they get their ideas. Another question often follows--do you take your characters from real life?

My answer to the second question is--yes, but mainly no. Perhaps a hero in one of my historical romances might be inspired by qualities I've discovered in a particular person, but to me, the whole point of him being a *hero* in a romance novel and not just a protagonist, is that he's LARGER than life.

Having said that, there's inspiration for heroes everywhere. Take yesterday, for example. I caught the train to the city to visit a jeweller. On the way, I sat opposite a strapping young lad who couldn't seem to talk to his friend about anything but Rugby football. Now I'm not a nosy person by nature (OK, yes, I am--it goes with the job description!) but in my defence, when you're sitting opposite someone on a train for half an hour with nothing to occupy you but whiney girly band music eking out of the iPod of the girl next to you, you tend to pick up a lot about the other passengers. 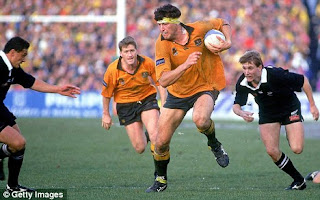 I noticed that these two young men spoke in short, staccato sentences. That they were sitting two rows of seats apart (presumably to dominate as much space as they reasonably could and still hear one another speak.) The fellow opposite me, whom I took to be 16 or 17 but had the physique of a 20 year old, had his knee strapped, which, given his conversation, argued some injury sustained on the football field. Below that impressive bandaging, he had a band-aid on his shin. Which I thought was rather adorable, really. Big hulking boy with band-aid. Sweet.

Right there. There's a hero in the making. Think of the metaphors--to a romance writer, playing football argues a level of heroism and physical prowess and even, in some cases, glamour. Perhaps he's the team captain of a failing, underfunded club and he needs to motivate these guys to win the premiership. The strapped knee symbolizes this hero's deep, abiding wound. The band-aid is that touch of whimsy that both humanizes the hero and makes him stand out from every other strapping footballer around.

Now, you can see how I'm turning quite an ordinary guy into a hero. I've left the reality of the boy himself far behind.

By contrast, my mission in town was to visit one of our premier jewellers--the best jeweller in town, in my opinion. Almost every significant piece of jewellery I own has been designed by him. Unfortunately, it was not an exciting mission--I had to get a quote for insurance--but that's beside the point. This jeweller is quite a different kind of hero from my strapping Rugby player. Cool, charming and sophisticated, he has innate style and seems to epitomize the word 'gentleman'. He knows how to treat women and handles many things personally that you would think beneath his notice as the owner of the business. He makes anyone who walks into his store feel special and appreciated. But the romance writer wonders, is it all a veneer? And his eyes are a piercing ice blue--which we know always means something in a romance, don't we? What might be going on behind those eyes that his clientele wouldn't begin to guess at? Is it a case of still waters run deep? Again, my imagination is developing this man well beyond what I know of him in real life. 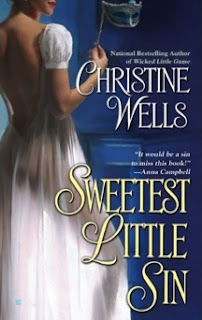 Now, the hero in SWEETEST LITTLE SIN, the Marquis of Jardine, is definitely not based on anyone of my acquaintance in particular, but he does have elements of men I know, and even some characters from movies and television. He has the upper-crust arrogance of Jeremy Northam's Mayfair spy in the movie Enigma, the ruthless toughness of Daniel Craig's Bond, the strategic brilliance of Smiley in Le Carre's Tinker, Tailor, Soldier, Spy, and the hidden vulnerability of Richard Armitage's character in Spooks/MI-5. His passion for Lady Louisa Brooke is an unstoppable force, a sweep-the-table-clean-I-must-have-her-NOW kind of passion from a kind of hero who, let's face it, comes along rarely in real life.

Today, to celebrate its release, I'm giving away a signed copy of SWEETEST LITTLE SIN to one lucky commenter. So tell me, do you know any heroic men in real life? Who is your favourite hero in a romance novel and what qualities in him do you most admire?