The Journey Home
By Michael Baron
Publisher: The Story Plant
Release Date: May 11, 2010 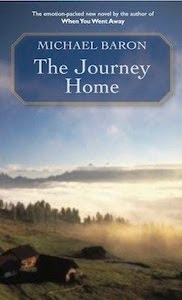 Joseph, a man in his late thirties, awakens disoriented and uneasy in a place he doesn't recognize. He sets out on a journey to find his home with no sense of where he's going and only the precious, indelible vision of the woman he loves to guide him.

Antoinette is an elderly woman in an assisted living facility who has retreated inside her head. There, her body and mind haven't betrayed her. There, she's a young newlywed with a husband who dotes on her and an entire life of dreams to live. There, she is truly home.

Warren, Antoinette's son, is a man in his early forties going through the toughest year of his life. With far too much time on his hands, he decides to try to recreate his memories of home by attempting to cook his mother's greatest dishes and eat them with her.

Michael Baron is a new author to me, and what a treasure it is to discover an author who has written such a poignant and incredibly moving story. The journey that Joseph, Antoinette and Warren are on goes in a direction that I was definitely not expecting. Sometimes detours can be wonderful things.

When Joseph awakens in a house full of strangers with no memory of anything but his name, he is understandably confused and upset. Although the people are friendly and offer him nothing but compassion and help, Joseph feels the need to leave, beginning his journey to a home he cannot remember. He is soon befriended by Will, a seventeen year old boy, who offers to drive Joseph wherever he wants, to search for the wife and home that his memory cannot completely recall.

Antoinette is suffering from Alzheimer's and continues to withdraw from those around her. Ever since her husband died five years ago, her life has not been complete. Her world now exists in her mind, where she is young and vibrant again and enjoying life with her beloved husband. The "real" world holds no appeal for her any longer.

Warren's marriage is over, he's lost his job and his mother has Alzheimer's: not exactly the best time of his life. He's searching for a way to reach his mother, so he decides to use the amazing dishes she used to cook and prepare them for her himself. Cooking always brought his mother such pleasure, and Warren hopes that by sharing these homemade meals, Antoinette may find joy again. But Warren discovers so much more than he could imagine with this experiment.


Jan smiled and sat back in her seat, her eyes sweeping him up, as they so often did. "I was going to say that I could taste your mother's love for you in it." The comment affected Warren especially strongly. Since he'd begun replicating the food Mom served, he'd thought about the fun she had creating these culinary monuments to family and friends. Now, though, he flashed back on the look of excitement in her eyes when she presented his plate and told him the name, or the pleasure she reflected when he would subsequently request the dish. She desperately wanted him to love this food, because if he did, he was accepting much more than nourishment from her.

The love between a parent and child, the passion and love between husband and wife, and the friendship and compassion between virtual strangers weave together in The Journey Home to form a bond that can never be broken. This is a story that will tug at your heart strings, bring tears to your eyes, and having you reaching for your family and friends to tell them how much you love them. And it may just make you want to head to the kitchen to whip up some homemade goodness to share with those you love. As Joseph observes, "Life was far to short to eat badly."