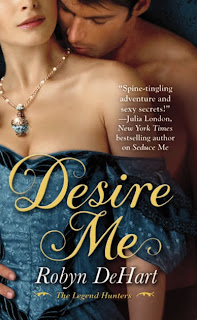 “The seven rings of Atlantis will fall by fire and steel, opening the path for the army of one. Empires will crumble and crowns will melt. The three will lose their blood unless the dove can bring salvation.”

Maxwell Barrett, Marquess of Lindberg, knows the saying well. It is the ancient prophecy woven through a map’s illustrations that predicted the destruction of a great land. But it’s not just any map or just any land—it’s the lost continent of Atlantis. After two years of searching, Max found the map at the age of seventeen and risked his life to retrieve it. It’s his discovery and devotion that prompted an invitation to Solomon’s, an exclusive club for legend hunters. Fifteen years later, he still has the map but hasn’t had any luck on finding the lost land, although not without trying. Then one evening, while playing cards, Max is faced with a beautiful woman asking him to add his map to the bid. He wins the hand, but is curious as to why the woman wants it . . . and is determined to find out.

Sabine Tobias has a very good reason for her interest in Max’s map of Atlantis—she is a descendant of the lost land and needs it to translate the prophecy. She and her aunts believe it tells of someone who is after the three guardians (Seeker, Sage, and Healer) for their powerful elixirs. Atlantis had once been poised to rule the world until the three guardians fled and took their elixir with them causing the Atlantean military to suffer and become defeated. After being warned by the Seer, Sabine and her aunts, one of which is the Healer, go to London to sell Tobias Miracle Crème. In each jar of face crème, they have added a drop of elixir to distribute it amongst London society and thereby throwing off the scent, if you will, of whoever is searching for it. Sabine is disappointed when she is unable to win the marquess’s map and is even more troubled when he comes to her shop the next morning demanding answers. When London’s top military generals are being killed off one by one, Sabine and Max realize that the Chosen One is not only after the guardians, he is also attempting to fulfill the prophecy. Can they trust each other and work together to stop the killer before he succeeds?

Desire Me is the second entry in Robyn DeHart’s Legend Hunters series—a series that has quickly become a favorite of mine. I really like how Ms. DeHart has taken famous legends and built her stories around them. The first book, Seduce Me, featured Pandora’s Box while this one is about Atlantis. I’m super curious which legend Ms. DeHart will tackle next! Everyone knows how I love a good adventure romance and this book fits the bill quite nicely. In this one, she pairs a sexy, determined man and a strong-minded, beautiful woman, both of whom are used to having things “their way”. This of course added just the right amount of tension to their exciting journey and kept me turning the pages wondering what would happen next. Add in Sabine’s charming aunts, Max’s supportive friends, and a crazy villain and you’ve got the makings for a delightful story!