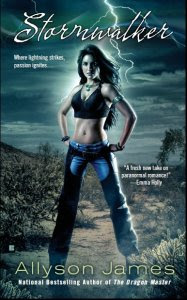 WOW!! That was my primary reaction after turning the last page in this paranormal gem by Allyson James. Stormwalker grabbed me from the first page and took me on one wild and crazy roller coaster ride. You know the kind that thrills you even as your stomach falls to your feet and you end the ride giddy from the adrenaline rush.

Janet Begay is a Stormwalker--she is able to manipulate the power of lightning, wind and rain--a power she inherited from her Navajo father's side of the family. Her mother is a goddess from Beneath; quite literally a mother straight from hell. Her family put the 'D' in dysfunctional! Janet is one tough cookie, but taking on the power of a storm can be overwhelming, and she needs some "help" releasing the residual power.

Enter Mick, the first and only man she has ever loved, the man she hasn't laid eyes on in five years. Mick is capable of "drawing" the energy into himself, which usually ends with him and Janet horizontal--all of that excess energy is channeled into many steamy and creative ways! Mick is as mysterious as he is sexy. Janet knows next to nothing about him, even after all they've been through together. She doesn't even know his last name...or if he even has one. The one thing she does know is that Mick can manipulate fire, and he is, as she is later informed, a Firewalker. In spite of all the questions Janet still has about Mick, his love for her is unquestionable. He will stand by her and protect her till the end.

Janet is called to the desert town of Magellan by the chief of police to help find his daughter Amy who has disappeared mysteriously. The area surrounding Magellan is full of vortexes, the place where the mystical energies of fire, air, earth and water come together in one space. They are also the gateways to Beneath, home of Janet's not-so-Mommy-dearest. As if that wasn't a big enough pain, Janet has to continually butt heads with Nash Jones, the local sheriff and Amy's fiance. Nash is an Unbeliever and thinks that Janet and her "woo woo" is total bull. But Nash seems to have some secrets of his own, and Janet is just the girl to figure them out.

A captivating, sassy, kick-ass heroine, an alpha hero who gives new meaning to the phrase "smoking hot", Skinwalkers, Changers, Coyote god and a bi-sexual magic mirror (no, I didn't make that one up!) come together to make this a book not to be missed. There is never a dull moment in this story and readers will become so engrossed, they will be ready to plan a trip to Magellan--it feels just that real! I could say more, but I don't want to spoil a thing. There are several "WHAAAT???" moments in Stormwalker--oh, I just love those!!!--and the best part of all of this is that this is the first book in the series. Book 2, Firewalker, will be released in November.

Allyson James also writes under the name Jennifer Ashley, under which she wrote The Madness of Lord Ian MacKenzie in 2009--one of my top picks last year. She is a brilliant writer no matter which sub-genre she tackles, and she will always be an auto buy for me. Stormwalker has an honored place on my keeper shelf...right next to The Madness of Lord Ian MacKenzie. Treat yourself to a walk on the wild side and run, don't walk, to your nearest bookstore and BUY THIS BOOK!!!