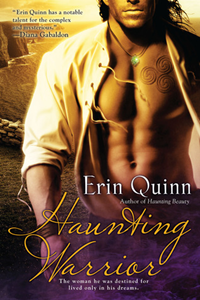 A past he couldn't forget.
Rory MacGrath's life changed the night his father mysteriously vanished after uncovering the secrets of the ancient Book of Fennore. The trauma turned Rory from an innocent boy into a troubled, cynical man. Leaving Ireland, he shunned his family, his heritage---and the very magic that has defined his people for centuries.

A dream he couldn't ignore.
Then the dreams begin...Dreams of an ethereal beauty whose touch is more real than any he's known. And in these dreams, she has a message---a calling for Rory to return home to a destiny that will take him beyond the realm of anything he imagined.

A woman he couldn't resist.
Lured to the castle ruins where his father disappeared, Rory is plunged back in time, and into the body of another man---a man betrothed to the very woman of Rory's dreams. She is in possession of the secrets of his past, his family, and his identity, and her hold on Rory is inescapable. For she is his doom. His salvation. And his destiny.

Time travel romances have always been a particular favorite of mine, so if that didn't sell me on Haunting Warrior, the cover most definitely would! Yes, Rory is oh so gorgeous on the outside, but even more importantly, he is beautiful on the inside. And did I mentioned he's emotionally tortured? Perfect hero material!

Angry and misunderstood, Rory is sent to America to live with his aunt when he's an adolescent. He stays in California, growing to adulthood, ignoring his family, never returning to the land of his birth. But some members of his family refuse to be ignored; Rory's recently deceased grandmother, Colleen, comes to him and urges him to come home to Ballyfionuir to face his destiny. Scared and pissed off, Rory initially refuses to go, but his dreams of a haunting beauty calling him home leave him no choice. While he is at his grandmother's funeral, he sees his mysterious dream woman across the cemetery and he follows her...and ends up hundreds of years in the past.

Saraid's people have been murdered and hunted by Cathan Half-Beard, his men, and his son, Ruairi the Bloodletter. Her brother, Tiarnan, makes an agreement with Cathan to give Saraid in marriage to Ruairi as a step toward peace---a peace that Saraid knows will never happen, but she agrees just the same. During her wedding to Ruairi, Saraid gets the feeling that there is something different about the Bloodletter, like there is someone else behind his eyes. Indeed, Rory now occupies the body of the man who looks like his twin, and is more confused than Saraid by where is he is and what is happening. But it doesn't take long for Rory to realize that joining with this woman is his destiny, and they must work together to save Saraid's clan from the greedy Cathan and find a way to destroy the evil and mysterious Book of Fennore.

As I said before, Rory is one of my favorite types of heroes: alpha to the core, tortured, sexy, and honorable and loving when it comes to his heroine. Rory is understandably confused and disoriented by his trip to the past, but is thrilled to finally be with the woman of his dreams. At first his primary goal is to find the Book of Fennore, since he's convinced it's the key to his return back home. But as time passes, his attraction to Saraid turns to something much deeper, and Rory knows that their lives are irrevocably intertwined and his return to the future is no longer as simple as it seems.


He'd convinced himself he'd come to this time and place because of the Book. Because of the half-baked quest his dead grandmother had sent him on. But now he acknowledged that was all an elaborate fabrication. He hadn't come for the Book. He'd come for the girl. This girl, this woman who'd crawled beneath his skin and nestled at his heart before he'd ever even met her.


Saraid is a heroine of quiet strength, willing to make any sacrifice to save her people, including marrying a man like the Bloodletter. The man she thinks she is marrying is no longer behind those arresting blue eyes. Gone is the cold-blooded killer and in his place is a man of honor, love and passion. Rory steals Saraid's heart and she knows that she will do anything, including using the Book of Fennore, to keep him safe. Even if the cost of her sacrifice is her very soul.

Haunting Warrior is the second book in this series by Ms. Quinn. I have not read the first book, Haunting Beauty, but I'm sure that it would enhance this story, even though it can stand alone. Ms. Quinn will release Haunting Desire, which is Tiarnan's (Saraid's brother) story, later this year. She leaves her readers dying to know what will happen with this one!

So if you fancy a trip through time to ancient Ireland, grab a copy of Haunting Warrior and lose yourself in this tale of secrets, magic, and the enormous power of a love that transcends time.