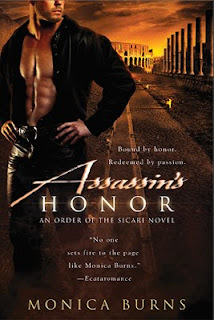 After her parents were brutally murdered five years before, archeologist Emma Zale devoted herself fully to her work. She has the ability to see the past when she touches ancient artifacts and considers it to be both a blessing and a curse. While searching Ptolemy’s tomb in Cairo, she discovers a symbol that proves her parents were correct about the existence of the Sicari, an ancient order of assassins and descendants of Ptolemy’s personal guard. When Emma goes out to tell her friend and mentor what she unearthed, she finds him dead—and in the same manner her parents were killed. This leads to her being brought to the police station for questioning, but eventually she is let go. Upon returning to Chicago, Emma attends her friend’s funeral and goes through some personal items he left behind. One such item is an old Sicari coin. She sets it down to rummage through some papers at her desk (formerly her father’s desk) and finds a hidden piece of paper containing a cipher written in hieroglyphs from her father. Emma is used to solving her father’s coded messages, but this newly discovered one is extremely complicated. When a sexy stranger enters her home demanding she tell him where the Tyet of Isis (a powerful antiquity) is, Emma is about at her wit’s end—until she is almost killed and the sexy stranger saves her life and takes her into hiding amongst his people. It appears that someone else believes she knows where the artifact is, as well.

Sicari lord Ares DeLuca believes that Emma has or knows where the Tyet of Isis is. It’s important that Ares find it because if the relic fell into the wrong hands, it could spell disaster for his people. The Sicari were part of Ptolemy’s personal guard and later part of Rome’s Praetorian Guard, the personal bodyguards to Caesar. During Constantine’s rule, a power struggle split the guard in two (the Sicari and the Praetorians), the result of which led to the persecution of the Sicari and their families. The ones who escaped became assassins to survive. So naturally, the Sicari keep themselves hidden to ensure survival and will kill only to protect those who don’t have the ability to protect themselves. Someone like Emma. When one of Ares’s men is viciously murdered by the Praetorians, he and his guild (the Sicari Order’s Chicago guild) bring the man’s body back to his family in Michigan for the funeral. While there, Emma and Ares grow closer and Emma learns something about her father that she didn’t know. And at the same time, the Praetorians are still after Emma for information.

With Assassin’s Honor, Monica Burns has created a unique world in combining paranormal and historical elements in a contemporary setting. I must say that I really enjoyed it! Ares is an awesome hero that possesses so many qualities I love in my heroes—he’s sexy, compassionate, protective, selfless, and honorable. He takes care of those he loves at all costs. Sigh. I liked Emma, but I didn’t love her as I did Ares. She’s clever and bright and has a bit of an attitude (which are all traits I like in a heroine), but there were a couple times when I wanted to yell at her, what are you thinking? or get over it! I will say that it did create some delicious tension between the two. The mystery of the Tyet of Isis isn’t solved by the end of this book (though it's named in Emma's cipher), so I’m assuming that thread will continue into the next one. And luckily, we don’t have long to wait as Assassin’s Heart releases in September! It features Ares’s sister and his second in command, both of whom were valuable secondary characters in this book. Assassin’s Honor is a great start to what promises to be a terrific series by Monica Burns!