Guest Review - - The Countess and the King

The Countess and the King: A Novel of the Countess of Dorchester and King James II
By Susan Holloway Scott
Publisher: NAL
Release Date: September 7, 2010 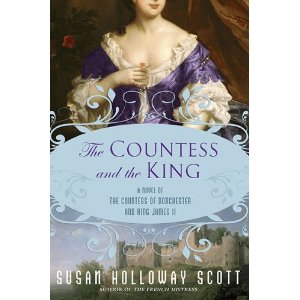 The Countess and the King is Susan Holloway Scott’s fifth book set in Restoration England with its dissolute court and its political and religious intrigues. This book, like the others, takes a woman who is a minor note in historians’ accounts of the period and brings her to life in vivid detail, enabling the reader to understand the experiences that shaped her, the choices she made, and the strengths and weaknesses that defined her.

By any account, Katherine Sedley was a fascinating woman. She was the daughter of Sir Charles Sedley, a wealthy rake, sometime playwright, and member of the “Merry Gang,” a group as famous for their debauchery as for their wit. Her mother, also Katherine and the daughter of an earl, suffered from delusions, imagining herself the Queen of England and insisting that she be addresses as “Her Majesty.” Scott’s choice of a first person narrator gives the story immediacy and power. The book opens with the young Katherine, not yet ten, leaving her home and mad mother, who was soon after taken to a Catholic convent in Ghent, and entering the libertine world of her father.

Scott reveals the strong bond between Charles Sedley and his daughter, his beloved “Kattypillar,” but the baronet is alternately a cautious and careless father. The child who is not quite ready to part with her favorite doll soon becomes part of a “giddy world of pleasure and amusement and debauchery.” Plain even as a child, she distinguishes herself from the beginning by her wit and her willingness to speak what others would leave unsaid. After three years with her father, she describes herself in terms that struck this reader as poignant:

It is said that the habits established in youth are the hardest to break as the years pass, and certainly that was the case with me. My father’s indulgence gave me much freedom and little guidance, and like the fledgling bird that tries to fly too soon to flutter unformed wings, my first attempts to act beyond my tender years were often not sweet. I told unseemly jests, I swore when I lost at cards, I laughed too loudly, and my ever-sharpening wit was much more suited to one of Father’s libertine friends than a brash, ungainly girl of thirteen.

Katherine’s “five golden years” with her father end when he takes Ann Ayscough as his common law wife, a relationship that angers his daughter on her mother’s behalf as well as her own. Not surprisingly, the libertine’s daughter and the newly fashioned Lady Sedley, who desires to reform her husband’s profligate ways, have a stormy relationship. Thus, when an unexpected meeting with the Duke of York leads to a call from Charles II that Katherine join the court as a friend to the Duke’s bride, she welcomes this new stage of life.

Her years at court lead to heartbreak, scandal, and power. She survives an unhappy love affair, an aborted engagement, and the stratagem of enemies and eventually becomes the mistress of the Duke of York. Shortly after he is crowned James II, he creates Katherine, Baroness of Darlington and Countess of Dorchester. Scott’s portrayal of Katherine’s years at court captures the flamboyance, the machinations, the alliances, and the betrayals of the second Stuart court. By allowing Katherine to tell her own story, Scott gains the reader’s sympathy and admiration for this woman who refuses to conform to the limits her world would have forced upon her, a woman, the antithesis of all her world considers beautiful, whose wit and will enthrall a royal, whom she views first as a conquest but comes to love and understand as a man and as a monarch.

The Countess and the King is historical fiction rather than historical romance, but it offers conflict and romance aplenty to satisfy historical romance aficionados. It lacks a conventional happy ending, but Scott provides an afterward that assures the reader that Katherine found happiness and that she remained a spirited original throughout her life. If you ever sat through a history class that left you yawning, I recommend this book as the perfect antidote. It will show you history as exciting and alive and human. As for me, I’m not sure what Scott has in store for her readers next, but I am sure that I will be journeying with her back into 17th century England or whatever other slice of history she chooses to mine for her fiction.