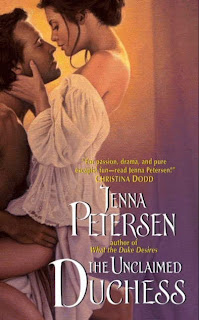 Rhys Carlisle, Duke of Waverly, has lived his life adhering to the strict social dictates ingrained in him by his late father. He has a reputation for being distant, cold, and obsessed with maintaining the sanctity of his rank. Like his father, he believes that all emotions are weakness and that a duke should not congregate with anyone below their station. After he marries his longtime fiancée, Lady Anne Danvers, and they return from their honeymoon, Rhys is visited by his friend Simon, Duke of Billingham, who delivers the words that will change Rhys’s life forever: he is a bastard son of the late Duke of Billingham. Simon also informs Rhys that someone else knows their secret and is attempting to blackmail them. Naturally, Rhys is confused and angry and he immediately rides off to be alone as he doesn’t want anyone, including his new wife, to witness as he struggles with the shocking truth of his birth. The stubborn Anne later confronts him at his hideaway, but Rhys refuses to divulge his secret in order to protect her. He figures that if they separate, then when the scandal breaks, Anne won’t be viewed as a partner in the scandal, but as a victim. What he doesn’t count on is how much his wife is willing to fight for him. And despite how close they become while at the cottage, he knows he must return home to deal with the impending scandal.

Lady Anne has been betrothed since birth to Rhys and has been in love with him for nearly two decades—ever since he rescued her from his teasing friends when she was a little girl. She has been raised to be the perfect duchess and hostess to Rhys and hopes he’ll possibly return her love someday. After such a long engagement, Anne is thrilled when they finally marry and believes it’s the perfect beginning. Needless to say, she is stunned when upon their return Rhys leaves with no word as to his whereabouts and doesn’t come back after three days. Anne frantically calls upon Simon demanding he tell her what was said between him and her husband. Simon doesn’t feel it’s his place to reveal all to her, but does tell her where Rhys might be. Anne goes there and finds her husband a broken man. She is determined to support him...even if he won’t tell her why.

The Unclaimed Duchess is the second book of Jenna Petersen’s Billingham Bastards series. Readers met Rhys in the first book, What the Duke Desires, and I was anxious for his story, despite the fact that he came across as arrogant. I actually like a little arrogance in my heroes. *g* He starts off as sort of a jerk in this book, but with the steadfast love and devotion of Anne, he becomes a hero truly worthy of her love. Anne was a wonderful heroine and really embodied the phrase “stand by your man”. She wasn’t weak and she never gave up. “...I’ve always seen something more in Rhys. I have always known it was there, hiding...perhaps being protected by that cold shell he presents to the world. I believe...no, I know he has a capacity for true nobility beyond his rank, beyond the blood and family history he holds in such high regard.” I especially enjoyed the time Rhys and Anne shared at the cottage getting to know each other better. It was very touching. Plus, fans of the first book will be happy to revisit Simon and Lillian as they play pivotal roles in this story. The Unclaimed Duchess is a great addition to the series that leaves me wanting more—I can’t wait for the next installment!