Review - - The Surrender of a Lady 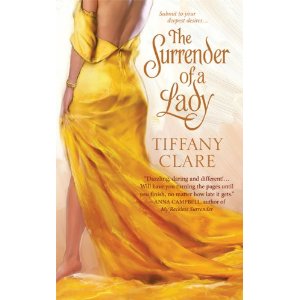 Every so often, a new author comes along who is willing to push the boundaries of traditional romance.  If we're lucky, that author will have the skill to weave a story that has us, the reader, opening our minds, and hearts, to something fresh and new and enthusiastically embracing her characters as we accompany them on their journey.  This year, that author is Tiffany Clare and in her bold, exotic and exquisitely written debut book, she brings us the compelling and deeply sensual story of Lady Elena Ravenscliffe and Griffin Summerfield, Marquess of Rothburn, a young couple in love, ripped apart by the ambitious treachery of others and reunited ten years later in a most unusual way.

In 1841 Constantinople, Elena, a new mother and English lady, is shocked and sickened to discover her miserable worm of a husband has gambled her away to a slave trader who drags her from their home and sells her to a Turkish harem on the Isle of Corfu. (Don’t worry. Said worm meets a very satisfying end.) Once in the harem, it soon becomes evident that there is no escape for either Elena or her baby son and, faced with unthinkable circumstances for a gently bred lady, she makes the only choice a mother can. For the safety and well-being of her child, she submits to the life and rules of the harem. Of necessity, Elena and her former life are forgotten and a new identity is born. She becomes Jinan and slowly, over time, adapts to the life of the harem, the attentions of Amir, the harem master, and to the reality of sharing her body with men who pay for the privilege. And gradually, as the initial shame and revulsion fade, a new woman emerges: a confident and strong woman who embraces her sensuality and her body as only the most desired woman of the harem can.

Every step toward the private harem quarters, toward the bedroom with Amir, reinforced that conviction. This was not duty but something she had accepted over the months.

With every step away from the men she felt a thrill pumping in her blood. Instead of the repulsion Elena should feel about catering to these men’s desires in the near future, Jinan felt liberated.

This was her. Jinan. A woman hiding beneath a veil but willing to take on any challenge, not a simpering miss hiding behind her fears.

Was it perhaps because she felt safe here? Because she knew her son was safe in this wanton world of sex, scandal and strange proclivities unfathomable to her as of yet?

Coming to terms with this life felt good in her soul. She’d been unleashed from her old restrictive life and felt a strange freedom of her senses, heart and mind.

Now she was and would forever be Jinan.

Ironically, this was paradise.

Griff has been through his own fires of hell during the years he and Elena have been apart but he’s never forgotten the girl he had planned to make his wife nor has he ever stopped wanting her. While visiting the harem with a colleague, he’s understandably shocked, but undeniably intrigued to find a darkly seductive beauty’s favors being sold on the auction block – a beauty he suspects is the long lost Elena. He can’t resist having her and buys her time for three months, intending to sate himself with the sensuous woman now known as Jinan. He can’t imagine how Elena might have ended up in a harem but it isn’t long before he’s sure that the innocent young girl from London and the sensual woman from the harem are one and the same and as the end of their time nears, he vows to find a way to free her from the harem forever. What he doesn’t know, and could never imagine, is how firmly a part of the harem world Jinan now is and it never occurs to him that, whether she loves him or not, she may have very good reasons for not wanting to be rescued. By taking matters into his own hands, Griff may have finally found his one true love, only to lose her forever.

The Surrender of a Lady is one of the best books I’ve read all year or, for that matter, in any year. The story grabbed me from the opening paragraph…

“What do you mean, you’ll work this out? You’ve gambled me away! I’m your wife, for heaven’s sake!”

…and still hasn’t let me go. I’ll be thinking about these characters for a very long time. After reading late into the night and turning the final page with a heartfelt sigh, I immediately sent an email to the author. Perhaps sharing a portion of what I wrote (don’t want to give away any spoilers) will best describe my feelings about this book.

"OH. MY. GAWD! I started The Surrender of a Lady yesterday. I finished it last night. Not a single item on yesterday's "to do" list got done and you know what? I don't care! I loved this book!


First, you write beautifully - with words that flow across the page and draw me into time and place as if I'm actually there. From the first page to the last, you kept me on the edge of my seat, waiting to see what would happen next. You brought to life every one of my "forced into a harem" fantasies and I'm sure I'm not the only one out there who's had that particular fantasy. You gave me a heroine I could relate to (who doesn't understand the fact that a woman will do anything to protect her child?) but you also made her a sensuous woman who learned to embrace that sensuality and the power it carried.


Amir is basically a pimp dealing in the commerce of women and yet you made me care about him. He had to stay true to who and what he was and I understood that but I cared for him in spite of it.


Griff is a perfect hero for Jinan. I like that he's flawed and has been through his own "fires of hell" before the two are reunited. The love scenes between them had me reaching for a fan, and wishing for a Griff of my own, but it's his...unwavering love...that won my heart.


I think this book is going to rock the house, much in the same way that Anna Campbell’s Claiming the Courtesan did a few years ago, which makes it very fitting that she's provided the cover quote for The Surrender of a Lady.


I predict great things...for both the book and its author!"