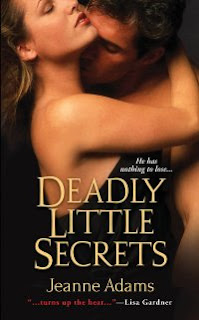 It took just one book for Jeanne Adams to be added to my auto-buy list and her second and third books have only further solidified her position as one of my favorite “go to” romantic suspense authors. In Deadly Little Secrets, she combines a tightly-woven plot with sizzling passion and intense suspense to once again create a story that enthralled me from beginning to end, keeping me on the edge of my seat and happily reading late into the night. And, if that isn’t enough, she waited until I was proudly patting myself on the back for solving the mystery within the story before adding a twist that had me saying; “WHOA! I sure didn’t see that coming!” I’m now eagerly counting the days until the next terrific story from this up-and-coming star of romantic suspense!

After a mission in Rome goes tragically wrong, CIA agent, Ana Burton is placed on probation and transferred to the highly undesirable Cold Case division in San Francisco while she awaits a final determination on the future of her career. Keeping a low profile, she quietly goes about her job until a ten-year-old cold case involving art fraud and multiple murders lands on her desk, causing all her instincts to go on red alert and leading her to billionaire art collector, Dav Gianikopolis and his chief of security, Gates Bromley.  The chemistry between Ana and Gates is immediate, and not entirely welcome, as evidenced by this first telephone introduction:

She was so mesmerized by the voice, it took Ana a heartbeat to make sense of the words. “Yes. I’d like to make an appointment with Mr. Gianikopolis to discuss his losses in the incident. I’m following up on some new leads.”
I’ll be happy to meet with you, get the information, and assess if there’s any new data we can add.” Holy cow, the man’s voice was pure, liquid sex.
For a second, all she could think about was the image of liquid sex. Jeeez, she had to get out more. Jen was right, and she hated to admit it. In the next second, she processed what he’d said and bristled at the high-handed phrasing. Assess the data, my ass. Fabulous voice or not, this guy needed a set-down.

The scenes between Ana and Gates are terrific! From beginning to end, they dominate the pages of this book with their personalities, drive and sizzling chemistry.

Gates is a man who has suffered too many losses in his life and will do everything in his power to keep those he cares for safe, including Dav, a man who is more brother than employer and Ana, a woman he’s coming to care for more deeply each day. As Ana digs deeper into new leads on the case, it becomes apparent that there are people who will do anything to stop her, even commit murder. Gates is determined to prevent that from happening but, in a race against time, will he be successful? And, if not, who will pay the ultimate price?

With non-stop action, sizzling sensuality and a brilliantly complex mystery that kept me guessing, this is a book I could not put down.  There are also intriguing secondary characters that I look forward to seeing again in Ms. Adams' next book and a heroine and hero who engaged my emotions and had me cheering, crying and holding my breath for their happily-ever-after.

I highly recommend one of my favorite books of 2010 - the thrilling, sexy and suspenseful Deadly Little Secrets!