Review -- Much Ado About Marriage 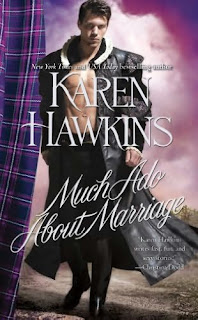 Much Ado About Marriage is the latest gem from Karen Hawkins, but it is not brand new. It is actually a complete rewrite of her first book, One Lucky Lord, which was written under the name Kim Bennett and published in 2000. Fans of Ms. Hawkins' MacLean Curse series will especially love this book, as it is a prequel and tells how the MacLean curse began. Even better, this is first in a new series, the Hurst Amulet series. And don't you just love that cover??

Thomas Wentworth, Earl of Rotherwood, is on a spy mission in Scotland, sneaking in to Duart Castle, stronghold of Clan MacLean. Having obtained the information he needs, Thomas is perched on the window ledge ready to crawl down when, without warning, the shutters are flung open, and he lands, unceremoniously, flat on his back in an herb patch. Dazed from the fall, Thomas opens his eyes and finds himself staring into the loveliest pair of dark eyes he's ever seen. Melodious voice, beautiful face, kissable lips and luscious dark hair complete the package of an enchanting Scottish lass---the one responsible for his fall. If Thomas, who is called the luckiest man in England, knew how much trouble this gorgeous creature would bring to his life, he would have hightailed it back to England at once. But fate had something else in store for him.

Wanting nothing more than to write her plays and see them performed in London, Fia MacLean has decided to sneak away from Duart Castle and her cousin Duncan MacLean. Duncan insists on her marrying some lackwit, and Fia has no intention of sitting idly by and letting that happen. Her destiny is to be a playwright in London, and nothing is going to stop her. Of course, she didn't count on a tall, dark and handsome Sassenach falling out of the window and slowing her down. When Fia realizes that this Englishman is headed back to London, she strikes a bargain: she will help him escape MacLean lands before her Duncan finds him if he will agree to take her with him to London and become her "sponsor." Little does she know that Thomas thinks to sponsor her in an entirely different way (he doesn't know her real identity). Fia thinks Thomas is uncommonly handsome and unbearably rude. But despite his boorish behavior, he is a distraction she eventually finds hard to resist.


Fia decided Lord Thomas's attractiveness faded even as they spoke. While he was blessed with beauty of face and form, 'twas obvious his Maker had been forced to scrimp when it came to the man's temperament. That was the real tragedy---he would have made a wondrous character for one of her plays had he possessed but a measure more charm.


But escape from the MacLean does not come; Fia and Thomas are caught by Duncan and his men before they leave the forest. Thomas is summarily beaten and nearly thrown in the cellar, but Fia intervenes on his behalf, so he finds himself in a guest chamber, a prisoner nonetheless. Days later, Thomas and Fia attempt another escape only to found in a very compromising position. Faster than they can blink, they are married and on their way back to London. Can a marriage begun under less than ideal circumstances succeed? And how long will it be before Thomas and Fia discover their desire for one another has turned to love?


"If all I ever have to bear is the laughter of the court, then I am indeed the most fortunate of men." To Fia's astonishment, Thomas clutched at his heart. "There are many things worse than the laughter of fools. There is loneliness and lost love. There is sadness so deep it wrenches your gut into a thousand pieces and you bleed with every breath. Worse yet, there is life without sun, without warmth. Life without Fia."


Filled with Ms. Hawkins trademark wit, Much Ado About Marriage is a delight from start to finish. Fia is one of the most charming heroines I've ever read. Her antics and repartee with Thomas had me laughing out loud. She is guileless, affectionate and easy to love. Thomas is handsome, sexy and arrogant in the extreme, but I couldn't help but fall in love with him. All he needed was a woman like Fia to straighten him out. The cast of secondary characters is irresistible, especially Robert MacQuarrie, Thomas's best friend. I sincerely hope that he gets his own book, because he captured my attention the moment he appeared.

Historicals are my first love, as are all things Elizabethan, and this book satisfies on every level. I couldn't wait to finish it, and now I can't wait to read it again! I highly recommend this witty, hot historical.