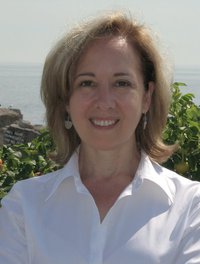 I am so happy to welcome one of my favorite authors and today's special guest, Virginia Kantra!  A USA Today bestselling author, six-time RITA finalist and winner of numerous awards, Virginia's fan following has grown with each book she's published.  After successfully writing in both contemporary category and romantic suspense sub-genres, Virginia created her paranormal Children of the Sea series, stories based on selkie legend that showcase her superb storytelling skill.  Learn more about Virginia at her website and visit with her at facebook.

Thanks for being with us today, Virginia and congratulations on the release of IMMORTAL SEA! Will you tell us a bit about the book?
Sure. IMMORTAL SEA is both a reunion romance and a coming of age story. While the story stands alone, readers who have followed the series will be happy to see some loose ends tied up here.

The premise is that before starting med school, young Elizabeth Rodriguez had a hot and wild one night stand in Copenhagen. She has no idea her lover Morgan is one of the finfolk, the shape-shifting children of the sea. Sixteen years later, Liz takes the job of island doctor on World’s End, Maine, hoping the community there will provide some needed stability for her son, troubled fifteen-year-old Zack.

But when her one-time hook-up walks back into their lives, she gets a lot more than she bargained for!

I'll say!  It's not every day that you discover when your lover says he's going for a swim he means as a shark or whale!


Your Children of the Sea heroes are all alpha males, probably none more so than Morgan. What draws you to this type of hero? Why do you think they are so popular with readers? 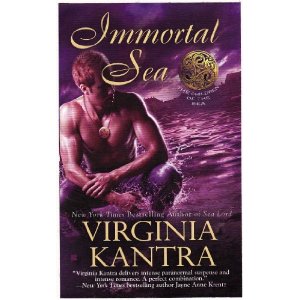 I just like strong, competent guys. Some of my favorite scenes in IMMORTAL SEA involve the different men—human and merfolk--jockeying for position on the island. Human police chief Caleb Hunter, new warden Dylan Hunter, the sea lord Conn ap Llyr, and proud, ambitious, ruthless Morgan. One of Morgan’s conflicts is that he is pledged to support the sea lord Conn but completely disagrees with his overlord’s tolerance of humankind. I like the tension that creates.

For me, though, a hero isn’t ultimately defined by his rank in the pack, but by his ability to show up on a daily basis.

There’s a scene in IMMORTAL SEA where Liz tells Morgan, “I need more than a quick grope on your way out the door. I need trust and tenderness and companionship and commitment. Can you offer me all those things? Or any of those things?” And the story hangs on his ability to answer that question.


I love that scene!
What would you like us to know about Liz and Morgan before we begin their story?
Morgan pretty much leaps on the page without introduction. At the beginning of the story, he reminds me a lot of Boromir in the Lord of the Rings. He’s hard, proud, noble, resentful...and wrong. He’s also the least human of any character I’ve written, so his transformation was particularly challenging.

I think any woman can identify with Liz. She’s an incredibly strong woman. If she weren’t, she wouldn’t stand a chance against Morgan.


I was so impressed with how you handled Morgan's transformation.  He's become one of my favorite Kantra heroes.
What inspired you to go “beneath the wave” and create a series of books about the selkie, finfolk and other children of the sea?
At the same time I was writing my first two romantic suspense novels for Berkley, I also did a couple of novellas based on legends about the fair folk. I had what I thought was the idea for another contemporary romantic suspense: police chief on a remote island in Maine finds a naked woman who’s been attacked on the beach. And then I thought . . . What if she wasn’t human?

The “naked” bit set me off, I think. There are folk tales up and down the British coast about the selkie, shape-shifters who take the form of seals in the ocean and cast off their pelts—get naked—to come ashore as beautiful men and women who have sex with humans. Which is a fabulous fantasy if you are a lonely sailor and a pretty unarguable explanation if you are an unmarried village maiden who can’t possibly name the father of your baby.
It was that juxtaposition, that tension between land and sea, between the contemporary, pragmatic, workaday world of the Maine islanders and the timeless, sensual, magical world of the merfolk, that totally hooked me into the first story, SEA WITCH, and into the series.
It hooked me, and many other readers, as well!
It’s no secret that I love this series and would be more than happy to see it continue into the next generation. IMMORTAL SEA is the fourth Children of the Sea book. What’s coming next? And, is the series open-ended or are there a finite number of books planned?

Yay! Thanks! Right now, I’m finishing up FORGOTTEN SEA, the story of Iestyn, one of the adolescents “lost” at the end of SEA LORD. It’s scheduled for June 2011. After that, the series takes a twist, but I can’t say much about it yet. (HINT: read the teaser in the back of IMMORTAL SEA.)
A very important part of IMMORTAL SEA is the compelling, and masterfully crafted, “coming of age” story involving Zack, the teenage son of the hero and heroine. Have you ever considered writing YA romance? Will we see more of Zack in future books?
Thank you so much for saying that! I have two sons, and I can tell you there’s definitely stuff in the book that came right from the heart. Some of my favorite books are YA: Ursula LeGuin’s THE BEGINNING PLACE, Richard Bradford’s RED SKY AT MORNING, almost anything by Robin McKinley. The couple in FORGOTTEN SEA—Iestyn and Lara—are definitely younger, in their mid-twenties. But I’m very happy writing paranormal romance for adults.

Thank you!  I think he's going to make a terrific hero!


What’s the best writing advice you’ve received and what advice would you offer to unpublished writers?
Not to accept too much advice. There’s no “right” and “wrong” in writing fiction; there’s only “works” and “does not work,” and each writer has to discover what works for her.


We all have our favorite comfort reads – those books we turn to time and again. What authors or books do you turn to for reading pleasure?
I hoard my favorite authors’ new releases. But when I need comfort, I take one chapter at bedtime. Nora Roberts always works for me. Always.


At your website, you say that your favorite thing to make for dinner is reservations. Let’s say your husband surprised you with a dinner party at your favorite restaurant. What fictional characters would be on the guest list and why?
Some of my favorite characters might be a little intimidating to spend an evening with. (“Why, yes, Mr. Darcy and Lord Peter, I am referring to you.”) At the risk of sounding stupid, I’d really like to go to World’s End and spend some time hanging out with my own characters when I didn’t have to take notes. Oh, and Elizabeth Bennett, because I’d want to hear her observations about all the other guests!

Not stupid at all!  I'd love to hang out with your characters in World's End.  We could all chat over lobster rolls and Italian wine and I'd try not to drool too much over Dylan, Caleb, Morgan and Conn. *grin*


One last question. If you could “shift,” as the children of the sea in your books do, what would you want to become and why?
There’s a scene where Morgan shifts:

He shook back his hair and dived, holding his breath against the shock of cold, the painful ecstasy, into the clear salt dark, into the pulse and surge and curl of the water, letting the joy take him, letting the water take him, one with the joy and the water.
Home.
Free.
His boundaries blurred and dissolved. His bones melted, stretched, fused. The pulse of the waves became his pulse, the heart of the ocean, his beating heart. He felt the Change rip through him like another pain, another ecstasy, tearing, convulsive, consuming as climax.
He retained just enough of his human mind to shape the Change as the hand of a potter shapes the clay. He was speed, size, strength, he was death in the water. He was the wolf of the ocean, Orcinus, seal killer, whale killer, killer whale.

Morgan goes to Orca, but I’d want to be one of the great baleen whales. A humpback, because of the song, I think.

Finally, there’s Liz’s challenge to Morgan: “I need trust and tenderness and companionship and commitment.” Which qualities do you require in a real life hero? How about a fictional one? Are they the same or different?


Great questions!  Okay readers, now it's your turn!
Virginia's publisher, Berkley, has generously offered three copies of IMMORTAL SEA which will be given to random commenters on today's blog.
Posted by pjpuppymom at 12:06 AM