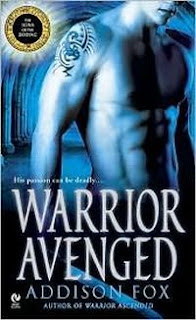 Scorpio Warrior
Fierce and cunning, my Scorpio Warriors will execute their task---and their enemies---with swift and fearless justice.
Those he battles will know the pointed sting of his scorpion's tail, the razor-sharp edge of his powerful claws.
Intense and passionate, my Scorpio will not be easily satisfied. But once he meets his mate---that fearless soul who can match the emotions inside him---will his sharp sting be calmed, his restless heart tamed.
Magnetically sexual, my Scorpio will attract many women, but will love only one....

---The Diaries of Themis, goddess of justice


Kane Montague is an immortal warrior and one time assassin for MI6. Six months ago he was burned by the sexiest woman he's ever known: Ilsa, a gorgeous secret agent who spent a few days in bed with Kane, days filled with more pleasure than he's ever known. But one morning he wakes up, Ilsa is gone, and Kane realizes he's been drugged and deceived. After six long months of searching, his anger building, Kane's fellow warrior, Grey finds Ilsa. Now Kane will finally discover the truth about her; a truth that will rock his immortal world.

The woman Kane knows as Ilsa has long been known by another name: Nemesis, goddess of divine retribution. But before she became a goddess, courtesy of Hades, she was Adrasteia, a nymph charged by Zeus's mother, Rhea, to protect the infant god from his father, Cronus. Adrasteia does her duty and raises Zeus to manhood, and he leaves her to fulfill his destiny and defeat his father. When Zeus returns, Adrasteia expects his thanks and the reward of a life on Mount Olympus. Instead, he curses her. Thousands of years later, she seeks her revenge against Mount Olympus and those responsible for her fate. Her quest for vengeance leads her to Kane Montague, but Ilsa never imagined she's lose her heart in the process.


His dark gaze captured hers and he leaned in for a kiss. His mouth pressed, soft and lush against hers, his tongue running a lazy request for entrance against the seam of her lips.

This was so right.

How could she have ever thought there was any other emotion in the universe to compare?

Under the light of his love and affection, the need for vengeance that beat in her soul had no room to sustain itself.


Kane and Ilsa's dance of deception leads is filled with twists and turns---slow and sultry with passion, fast and frenetic with danger---but it ultimately leads to love and redemption. They are both wounded and wary, and that is, perhaps, what makes them ideal for each other. As Hades tells Ilsa, "Those we love can't share our burdens with us if we don't allow them to." It's when Kane and Ilsa are willing to share their pain, that they are finally free.


All this was for her. This man wanted her. Needed her.

Was completely vulnerable to her.

And it was in the vulnerability that Ilsa saw the gift. That this proud Warrior would lay there before her, naked to her gaze and barren of any of his defenses.

And he desired her.

Warm heat suffused her as she realized what a precious treasure lay before her. How this man had changed the way she saw the world.

The way she saw herself.


Warrior Avenged has everything I love in a book: a sexy, enigmatic hero, a strong, capable heroine who is his match in every way, action, surprises, and plenty of steam! And the relationship of the Warriors with each other makes me laugh. Ms. Fox is spot on with the "guy speak"---always ragging on each other, they are typical men, even if they are immortal. With the second book in her Sons of The Zodiac Series, Addison Fox has given her readers one more Warrior to fall in love with. With twelve zodiac signs---Gemini is a twin, so that's double the pleasure---that's a whole lot of Warriors to go around. Although this is the second book in the series---Warrior Ascended was the first---it can stand alone. But for maximum enjoyment, I highly recommend reading them in order. It's a fantastic series, and trust me, you won't want to miss a single moment!


One lucky commenter will win a signed copy of Warrior Ascended and an ARC (Advanced Reader Copy) of Warrior Avenged (U.S. and Canadian addresses only, please).