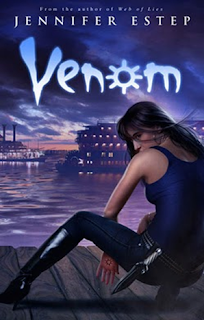 What kind of assassin works pro bono?
It’s hard to be a badass assassin when a giant is beating the crap out of you. Luckily, I never let pride get in the way of my work. My current mission is personal: annihilate Mab Monroe, the Fire elemental who murdered my family. Which means protecting my identity, even if I have to conceal my powerful Stone and Ice magic when I need it most. To the public, I’m Gin Blanco, owner of Ashland’s best barbecue joint. To my friends, I’m the Spider, retired assassin. I still do favors on the side. Like ridding a vampire friend of her oversized stalker—Mab’s right-hand goon who almost got me dead with his massive fists. At least irresistible Owen Grayson is on my side. The man knows too much about me, but I’ll take my chances. Then there’s Detective Bria Coolidge, one of Ashland’s finest. Until recently, I thought my baby sister was dead. She probably thinks the same about me. Little does she know, I’m a cold-blooded killer . . . who is about to save her life.

Gin Blanco is just a couple of months into her retirement from the assassin business, when she is called upon to do a favor for a friend, vampire Roslyn Phillips. Roslyn has a little problem that needs to be cleared up. Make that a big problem: Elliot Slater, giant and head henchman for Mab Monroe, the Fire elemental who controls the city of Ashland. Gin is only too glad to help, especially since Slater and his giant minions beat the crap out of her only recently. If she can rid Ashland of scum like Slater it will make her day and put her one step closer to her goal: killing Mab Monroe, the bitch who murdered Gin's mother and older sister. Yes, indeed, retirement is just a little too dull for the Spider!

Bria Coolidge is a new detective in the Ashland police department, and she's also Gin's long lost baby sister, the one she thought had died seventeen years ago along with their mother and older sister. While Gin is shocked (and secretly thrilled) to see her sister, Bria has no idea that Gin is her sister, Genevieve. Will the by-the-book-cop approve and accept her assassin sister? Gin will cross that bridge when she comes to it, but for now they both have a common goal: Elliot Slater. Then again, Gin doubts that Bria plans on carving up Slater like she does. Oh well, to each his own.

Gin is by all appearances tough and cold-hearted, but when it comes to those she loves ---her foster brother Finnegan "Finn" Lane, the Deveraux sisters, Jo-Jo and Sophia, and her sister Bria---her heart is as deep and wide as the mighty Mississippi. That hard edged exterior hides a gentle, caring soul. And new love interest, Owen Grayson knows that better than anyone else. They have a past connection that Gin does not remember, but Owen has never forgotten. When Owen tells her about it (I won't mention it here, reader, because it's too poignant to spoil), Gin is uncomfortable with his gratitude. Ever since detective Donovan Caine (Gin's love interest in books 1 and 2) turned his back on her because her could not accept her as the Spider, Gin is hesitant to open up to another man.


"I don't judge you for what you've done, Gin. Why are you judging me for another man's mistakes? Because Donovan Caine did make a mistake," Owen said in a soft voice. "Letting someone like you go."

Owen got to his feet and moved until he was standing in front of me. "Someone strong and tough and smart and sassy and sexy as hell. That's why I'm interested, Gin. Because you're all of those things and more. Not because of a small kindness that you showed to me in the part of my past I'd like to forget."

Owen's words made my heart ache. Because these---these were the words that I'd longed to hear from Donovan Caine. I'd wanted the detective to understand me, to accept my actions and be able to look past them toward the future we could have together. But Donovan was gone, and he wasn't ever coming back. Instead, Owen Grayson stood before me, a silent but clear offering burning in his violet eyes.


As sexy as I found Donovan Caine in the first two books of this series, I have to say I am really loving Owen. Who doesn't want a man who accepts every part of them, the good and the bad? Lucky Gin! Jennifer Estep continues to raise the stakes in this gritty, fascinating urban fantasy series. Gin is completely kickass, but she has a heart of gold. The secondary characters are equally fascinating, and with each book readers are given a little bit more of their backgrounds. For the full experience, I recommend reading this series in order: Spider's Bite, Web of Lies, and Venom. Book 4, Tangled Threads will be released in May 2011 and book 5 (yet untitled) will follow in October 2011. I am thrilled that Ms. Estep is continuing this compelling series and giving her readers more of the Spider and her show down with the evil Mab Monroe.