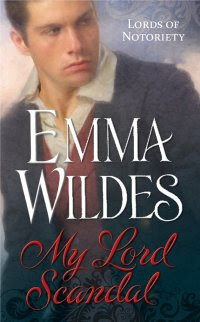 My Lord Scandal is the first installment of Ms. Wildes’ latest trilogy, called Notorious Bachelors, and it is a delightful read from the first page.

The novel begins with Lord Alexander St. James and Michael Hepburn, Marquess of Longhaven, breaking into the home of a fellow peer in search of an item Alexander’s grandmother determinedly believes belongs to the St. James family. During their search of the home, the gentleman are shocked to discovered that one member of the family has returned home earlier than expected. Alex just barely makes it to a bedroom balcony when the door to the bedroom opens and Lord Hathaway’s daughter enters the room. Hiding in the shadows on the balcony, Alex thoughts turn immediately to the beautiful woman in the room, not to his escape.

“There was something innately sensual about watching a woman undress, though usually when it was done in his presence it was a prelude to one of his favorite pastimes. Slim fingers worked the fastenings of her gown and in a whisper of silk, it slid off her pale shoulders. She stepped free of the pooled fabric, wearing only a thin, lacy chemise, all gold and ivory in the flickering illumination.”

Relieved to be home, away from the evening’s entertainment and her father’s matchmaking maneuvers, Lady Amelia Patton undresses in the quietness of her bedroom. Opening the doors to her balcony, Amelia relishes the cool evening breeze after the stuffy atmosphere of the evening’s ball, which did not help her breathing problems. Slowly inhaling the refreshing air, Amelia is shocked when a tall figure looms over her and asks about her welfare. While her inner voice suggests she should scream, Amelia is too dazed by the handsome man to do so. Instead, Alex and Amelia engage in a small conversation which leads to Alex stealing a kiss.

“Her breath fluttered in her throat and it had nothing to do with her affliction. She might be an ingénue, but she understood in an instant the power of that devastating, entirely masculine, husky tone. Like a bird stunned by smoke, she didn’t move, even when he leaned down and his long fingers caught her chin, tipping her face up just a fraction. He lowered his head, brushed his mouth against hers for a moment, a mere tantalizing touch of his lips. Then, instead of kissing her, his hand slid into her hair and he gently licked the hollow of her throat. Through her dazed astonishment at his audacity, the feel of his warm lips and the teasing caress caused an odd sensation in the pit of her stomach.”

As Alex continues to search for the family heirloom his grandmother desperately wants returned to the family, a devastating secret involving both families a generation back is revealed to Alex and Amelia. Even though both of their fathers oppose any relationship between Alex and Amelia, the couple is determined that love will conquer all.

My Lord Scandal provides the reader with an entertaining love story sprinkled with a little mystery and a good dash of sensuality. Ms. Wildes had me cheering on this endearing couple as they fight for their happily ever after. Now, I am looking forward to reading the next two books in the trilogy – Our Wicked Mistake and His Sinful Secret – which will be released October 5, 2010, and November 2, 2010 respectively.

So if you are looking for a new series to enjoy, I would highly recommend you start with this book!