We have a very special treat for you today! Charlotte Chatsworth, the heroine from Anne Mallory's latest masterpiece, One Night is Never Enough, has been coerced--er, has been gracious enough to be interviewed for The Romance Dish. Please give Charlotte (and her creator, Anne Mallory) a warm welcome!

An interview with the heroine of ONE NIGHT IS NEVER ENOUGH, Charlotte Chatsworth, by an Independent Agent* asking questions behind a screen (voice masked).

*Independence to be determined, time traveling magic and blurred realities not to be explained, identity much in question.

Interviewer: Charlotte, we met you in Seven Secrets of Seduction where you were jilted at the altar. How did that make you feel?

Charlotte: I...uh...well, I wasn't really jilted at the altar. It was more of a pre-altar arrangement. And mutual, I assure you.

Interviewer: Mutual because you knew there was someone out there who was far hotter?

Charlotte: Hotter? Why would I care about the body temperature of a prospective husband?

Charlotte: *looks suspiciously at screen* No. Because I saw that the hero and heroine of that book had eyes only for each other.

Interviewer: Maybe you were looking for someone better suited to your wild ways.

Charlotte: Wild ways?? What...who...when... To whom have you been speaking? I demand to know!

Interviewer: Really? That's delicious. I love it when y-, I mean, when interviewees demand. Easy to keep the conversation going.

Charlotte: You don't sound like you have too much trouble with that.

Interviewer: Excellent! A little jarring will do you good. Back to the questions - how do you feel about your father selling you to a dangerously scurvy, but VERY hot, man on the turn of a card?

Interviewer: We will have to change all of that.

Charlotte: I do quite well on my own, I assure you.

Interviewer: Being on your own isn't fun. You need some spice. Someone who will provoke you away from that chill. But someone on whom you can always rely.

Charlotte: You seem rather keen on provocation yourself.

Interviewer: You have no idea.

Interviewer: Did you just mutter? Charlotte Chatsworth, incomparable beauty and ice queen of the ton?

Charlotte: Do you have any RELEVANT questions?

Interviewer: How do you feel about love?

Interviewer: So you don't believe in it.

Charlotte: Of course I believe in it. And it is a lovely emotion for people who are able to show their emotions freely.

Interviewer: You can't show your emotions? You don't yearn to have someone to love?

Charlotte: Of course I yearn for it. But it is safer not to show... Wait. Strike all of that from the record!

Interviewer: So what if there was a really hot, virile, dangerous man waiting just for YOU? One who was completely and deliciously unacceptable. Could you yearn for him?

Interviewer: I think you could. Especially after I first observed you splayed out on a garden bench, your face full of longing and desire -

Interviewer: - falling to love and -

Charlotte: I believe the term is falling to temper!

Interviewer: - that passionate surre...wait, you are falling to temper? Now? Yes!!

Charlotte: Roman?! I am going to murder you!!


*Only the echoed sounds of mad laughter and running feet remain.

ONE NIGHT IS NEVER ENOUGH has a good deal of game playing in it of various varieties. If you had to play a game - winner take all, for high stakes - what game would you play? Chess, Poker, Vingt-et-un/21/blackjack, Monopoly, War, Trivial Pursuit, MineSweeper...other? Or would you figure out another way to turn events away from the game?

Anne will send a signed book (of the winner's choice) to a random commenter. 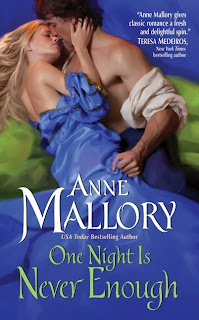 One Night is Never Enough
by Anne Mallory

From the first glimpse he knew he must have her-even if only for a single night...

Powerful, ruthless, seductive-the lord of London’s underworld-Roman Merrick gets anything he wants…and he burns for Charlotte Chatsworth, a polished jewel in the glittering ton. So he engages her debt-ridden gambler father in a game of chance, wagering ten thousand pounds against one night with the man’s exquisite daughter. And Roman Merrick never loses.

But one night is never enough...

Charlotte is devastated to learn that her reprobate father has lost her in a card game to the most dangerous man she’s ever met. With the threat of ruin behind every corner, Charlotte embarks upon a perilous path with the man she can not forget. But in truth, it’s Roman who has everything to lose-for a game undertaken for pleasure alone soon has him gambling his heart. And love and passion unleashed could bring his great, dark empire tumbling down...

Anne Mallory began writing on September 11, 2001 as an escape from the day (because she needed an escape with a happy ending). She sold her first book, Masquerading the Marquess, to Avon in 2003. Her eighth novel, For the Earl's Pleasure, was nominated for a RITA award at last year's RWA conference in Orlando. Andrea gave Seven Secrets of Seduction 5 stars and called it her favorite historical romance of 2010. Her latest, One Night is Never Enough, which was released on February 22, 2011, has been garnering rave reviews. Look for her next book (Andreas's story) in October! Please visit Anne's website http://www.annemallory.com/ to learn more about her and her delicious stories!
Posted by Andrea at 3:09 AM