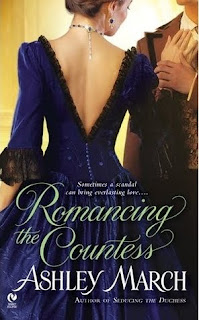 “You want me to help you forget your wife.”

He shook his head, muttering a curse. Then he stepped closer. “You foolish woman,” he whispered, his expression tortured. His hand cupped her cheek. “Do you not remember when I said it before? No matter, I’ll say it again. I want you.” His thumb swept across her upper lip, much as it had done before he’d kissed her in the garden. “I desire you.” His hand left her cheek, his fingers stroking over the ends of her brows, across her eyelashes as she closed her eyes, meandering down her face until he held her chin.

Devastated by the sudden death of his wife in a carriage accident, Sebastian Madinger’s world is rocked further when he discovers his beautiful, supposedly perfect wife was having an affair with his best friend. Finding himself questioning the paternity of his young son, Sebastian is determined to keep the affair a secret from society so that others do not make judgments about young Henry. The person he needs to speak with first and foremost is Leah George, the wife of his best friend. Believing he will find an emotionally wrecked woman, Sebastian is aghast to learn that Leah is planning a country party a mere few months after the accident.

Leah George has known about her husband’s affair with the Earl of Wriothesly’s wife for over a year now. As much as she would like to, Leah is unable to erase the memory of walking in on Ian and Angela during one of their love making sessions. Living with a man who loves and desires another woman has been hell on earth for Leah. So when she receives the news that Ian and Angela were killed in a carriage accident, Leah does not cry any tears of grief. No, she has grieved the death of her marriage for over a year now. This time, Leah’s tears are tears of relief. Though society believes she should put on her widow clothes and grieve for the next year, Leah is ready to move on with her life.

Sparks begin to fly between Leah and Sebastian upon their first meeting. Sebastian doesn’t know what to think of Leah as she is not the picture of a grieving widow but he is somewhat captivated by Leah’s “ready to live life” mentality and her no-nonsense, tell-it-like-it-is talk. Leah knows that Sebastian is in the midst of many emotions – shock, hurt and anger – just like she was a year ago when she found out about the affair. She slowly draws Sebastian away from those emotions through small, seemingly insignificant activities during the country party. A laugh here, a smile there. And before you know it, Sebastian is thinking about life beyond his dead wife and her betrayal. Both of them had to learn to trust and feel desired again. I thoroughly enjoyed watching the emotions of Leah and Sebastian chart a course to a happily ever after.

He stepped forward, not close enough that they touched, but enough that she could feel the heat of his body warming her own as he bent his head. “And I promise you,” he murmured in her ear, “I want you more than he ever did. Much, much more.”

Ashley March’s writing is smooth and easy, yet so very intoxicating. One page, one chapter, is just not enough. I continually found myself saying, “I will just read one more chapter.” This book is a read-from-front-to-back-in-one-sitting kind of book. So carve out some time, find a comfy spot and enjoy a few hours of love and romance courtesy of Ashley March. You won’t be disappointed!