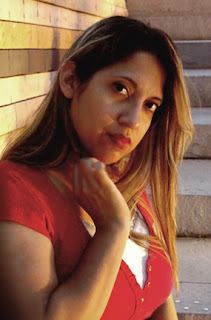 Today, it's our pleasure to welcome Dee Tenorio back to The Romance Dish. This talented author has more than ten published romances to her credit spanning the sub-genres of contemporary, paranormal mystery/suspense and romantic comedy. Her newest, DECEIVING THE PROTECTOR, second in her Resurrection paranormal-suspense (with Shifters!) series was recently released by Carina Press and has been garnering rave reviews. Please welcome Dee as she blogs about...

You may not believe this, but when I was growing up...folks used to think I was weird. I know, shocking. Granted, I was pretty out there. Crazy hair, non-conformity issues and a great big go-to-hell-if-you-don't-like-me attitude. Yup, I was a peach! But those weren't the reasons other kids thought I was weird. That came straight from my reading. I had a thing for Stephen King when I was ten. Went on a Dean Koontz bender by age 12. At 14 I was a total goner for VC Andrews—of course, who wasn't, right? Then I found James Patterson and there was no going back. Nowadays I'd be called "Emo", I'm sure, but that wouldn't fit because the truth is, I just love a great, dark story and all those books gave me the time of my life.

It's probably no surprise, then, that I've found a place in suspense novels as my career has continued.

It gives me a fun thrill to write suspense and I'll tell you why. I like my characters are dark and edgy, with histories that are designed to be complicated. I love complicated. Nothing in this world is meant to be easy and much of it is about doing what you have to, not what would be easiest. In fact, easy is generally pretty hard to write. It comes off as silly when plot points are too simple or too pat. The real fun is in coming up with something that explains a feature of the world building. Like making a delicious chocolate cupcake for a choco shop—it's gotta look as good as it smells or folks won't enjoy it and I really want you all to enjoy what I write.

The other nice thing about writing dark—part of what makes it so fun anyway—is that you don't have limits. If you want to go darker, there's always room to change. Throw in a mystery, find a dead body, get a richer and richer character history. You can really weave in those fathoms that give depth. Lighter stories can and should have some depth, but give too much and you throw off the balance, meaning the entire story would have to change depending on your details. I've just never been good at having limitations.

Readers always know what they want in each type of genre. You have to respect those desires and give them what they ask for. Like the dark outlines of a coloring book image. A suspense in general usually requires a world view that is full of shadows in which to search for clues or comparisons. Paranormals seem to be twice as dark. So, my stories, which are both, have to be embroidered with those colors and tastes. I have to admit, I really love that challenge. I love the prospect of taking what people expect, what they demand, and twisting it just that tiny little bit to make it new and unexpected. That probably makes me a little bit twisted, but what's life without a little challenge, eh?

So how about you tell me. Do you like dark stories? Or is lighter fare where you find your fun? 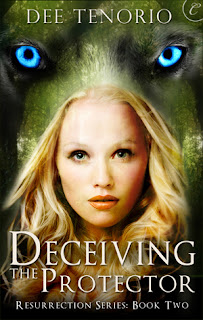 You can order the book from Carina Press here and read an excerpt here.

The mate he never wanted may be the woman he can never have...


After a series of murders is discovered along the trail of the Shifter Underground, wolf soldier Jensen Tate is assigned to find and protect a missing stray. But Lia Crawford doesn't seem to want his protection. When she eludes his watch and returns with mysterious injuries, Tate knows she's hiding something. To discover her secrets, he'll have to win her trust...and get closer to the woman he thinks may be his mate.


Lia has reasons to keep her distance. The killer is haunting her steps, determined to claim her. He will come after them both if he sees how drawn she is to Tate, though it becomes increasingly difficult to deny her attraction to him. Protecting Tate is vital – but will her deception cost her his love?