We are happy to have author Anne Hope dishing with us today! Her debut book, Where Dreams are Made, met with much success in many writing contests, including being an RWA Golden Heart Finalist in the single title category. It was eventually bought by Samhain and released both as an e-book and in print last August. Please welcome Anne Hope to The Romance Dish! 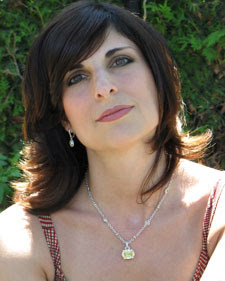 And so another year begins, ripe with promise. Everyone looks toward the future with tempered hope. 2009 broke a lot of spirits, left many struggling to make ends meet and keep their optimism alive, something that’s not easy to do in today’s world, where success is measured in dollar signs and everything has a price. Sometimes, while endeavoring to keep up with the pace society has set, we lose touch with the things that matter most—friendship, love, family.

Romance novels are there to remind us that all is not lost, that hope always remains, and that love can heal even the most ravaged soul. In Where Dreams Are Made, the heroine, Jenny, has fallen as low as a person can fall. Destitute and indebted to a ruthless man who will stop at nothing to own her, she must fight for her freedom, while battling to hold on to the optimism that has seen her through some pretty rough times. Everything is at stake—her dreams, her self-respect, even her life. So when an elderly gentleman offers her an impressive sum of money to spend two weeks with his grandson on a remote island in the heart of Puget Sound, she has no choice but to agree.

The last thing she expects is to fall in love with the very man she’s been hired to deceive, a scarred, reclusive toymaker with dark demons of his own. One whose heart is as damaged as hers. As Jenny struggles to help Daniel heal and carve a place for herself in his lonely world, she uncovers a well of strength inside her she never knew she possessed and finally finds the courage to take control of her life. 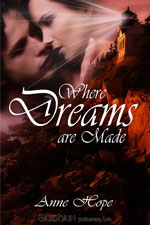 Where Dreams Are Made is a story of hope and redemption. It is the ultimate fairy tale, where Cinderella finds her prince, the Beast is saved by love, and the evil lord is vanquished. In a world where good doesn’t always prevail, where darkness lurks around every corner and love often wilts before it has a chance to bloom, romance novels keep our spirits bright and our hope alive. They show us that the past is dead and buried, the future still only a dream. All we really have is this one moment, and we must make the most of it.

In Where Dreams Are Made, a woman running from the past and a man hiding from the future realize that, sometimes, today is all that matters.

Pink-tinged clouds rolled overhead, scudding across an orange-streaked sky. Despite the glowing sun, the fast-approaching dusk was chilly, a cold wind whistling through the towering trees. Daniel had just finished cleaning the mess on the porch when Jenny wandered outside.

“What did you do with the squirrel?” She scoured the surroundings as if searching for it.

“Of course it matters. We have to bury it.” The expression on her face told him she was dead serious. “A few hours ago this creature was alive. It was climbing trees or scouting for food. We can’t just toss it out with the trash.”

Daniel had never met a person who had such deep-felt respect for life. Even though a part of him believed it was silly to have a burial for a squirrel, another admired her all the more for it. “Fine, I’ll get a shovel.”

When he returned, he noticed a single tear sliding down her cheek. Instinctively, he wiped it away with his thumb.

“I’m sorry.” She covered her reddening cheeks with her hands. “It’s just that this place seems so peaceful, so perfect. The sound of the waves, the smell of the ocean, the birds singing in the trees… For a while there I believed nothing bad could happen here. That nothing bad could find me.”

The sight of her slightly upturned chin, her damp cheek, the blend of hope and despondency in her eyes struck him like a bowling ball to the chest. He wished he could promise her that he would keep her safe forever. But finding the mauled squirrel today had worried him more than he’d admitted to her. He’d tried to make her believe an animal had done the deed, but after carefully examining the slaughtered creature, he was no longer convinced that was the case. The cuts had been too clean, too deliberate. The squirrel hadn’t been chewed or clawed, it had been sliced open.

“What are you running away from, Jenny?”

She turned to him, her features glazed with desperation, brimming with sincerity. “My life. My past. How about you?”

He reflected for a moment, his gaze sweeping over the quiet, empty land surrounding him. Jenny was right. There was nothing but the waves and the birds to listen to. Nothing real to touch or hold. Nothing but the clouds floating across the sky to indicate that time continued to inch forward. “My future,” he finally said.

Post a comment and you could win an electronic copy of Where Dreams Are Made. Thank you for dropping by. I wish you all a happy and prosperous New Year.

Where Dreams Are Made is available from Samhain Publishing and at all major bookstores, including Amazon, Barnes & Noble, Borders, and Chapters. For more information, please visit me at http://www.annehope.com/.