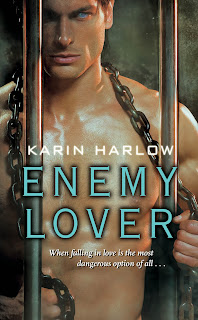 She turned around and faced him, her face expressionless. "I was brutally raped, then mutilated, by a human trafficker. The guys who were supposed to have my back never showed. I barely escaped with my life. When I healed, I went back for the bastard and killed him. I'm on the lam, Cross. A wanted woman. I work alone and prefer not to get involved on any level with any person or," she smiled, "vampire."

Tried, convicted, and sentenced for the murder of human trafficker Carlos Montes, former super cop Angela Giacomelli faces the next several years of her life behind bars. As Angela contemplates her future with desperation and despair while riding in a prison bus to the joint, she is kidnapped from the prison bus and soon finds herself in an interrogation room surrounded by nine men, all of whom look like they could take on the world by themselves. Angela is given two choices: (1) return to prison to face the sentence she has been given for the next 20 plus years, or (2) work for the L.O.S.T. organization. The Last Option Special Team is an organization that works on the fringes of the law, using every possible opportunity to put away very bad people. Of course Angela chooses to work with L.O.S.T. and she is immediately given a new identity. Angela’s old life is dead and gone. Her new life as Jax Cassidy is just beginning. Six months into her new life, Jax takes a key role in the latest L.O.S.T. case – eliminate Colonel Joseph Lazarus, leader of The Solution, a patriot organization using terrorism to fund itself. In the midst of the operation, Jax comes face to face with Marcus Cross, right hand man to Colonel Joseph Lazarus. Sworn to take any means necessary to accomplish the task, Jax is befuddled by her reaction to this blue-eyed hunk of a man.

Marcus Cross has led an awful life, full of pitfalls and rejection. His mother (who can only be described as a witch with a capital B) deserted him when he was only two weeks old. When Marcus tracked her down at the age of 12, she promptly told him to get out of her life or she would kill him. Raised by his grandfather, Marcus joined the Army as soon as he graduated high school. Enjoying some success in the Army, Marcus was shipped out to Afghanistan where he suffered a near fatal injury. Well, actually, it was a fatal injury. Finding Marcus nearing his death, Colonel Lazarus drank from Marcus and fed Marcus his life’s blood, thus changing Marcus into a vampire. Immortality has served Marcus well over the years. With no mortal distractions and trained to carry out any task without hesitation, Marcus is an asset to The Solution. However, when Marcus encounters mortal Jax Cassidy during one of his missions, his mind and heart are confused by the raw emotions she stirs in him.

She smelled exciting. Like a wild roller-coaster ride. He turned as she passed to his left, and looked down into the two liquid, dark-chocolate-colored eyes. Full red lips smiled, showing straight, pearly white teeth. She moved passed him toward the bar and his gaze followed. His cock thickened. She was one long drink of water. Her languid gait called to him to follow, and he automatically took another step forward. He caught himself after two steps. What the hell was he doing?

In my opinion, Marcus is one of those rare alpha heroes. He is self confident, but not so cocky you can’t stand him. He is tough and assertive, yet has a vulnerable quality that is so endearing. He is the bad boy and the boy next door (with fangs) all rolled into one hunky package. Plus the man exudes sexual tension just by walking in the room. He is confident in his desire for Jax and in her desire in him and isn’t afraid to tell Jax the way it is and the way it will be.

He explained, “You and me, we’re driven by pure animal instinct. And while there may be some hurt involved, it’s the good kind. The kind that makes you want more. That’s how it will be between us, Jax.” He stalked closer to her until only inches separated them. “Hard, furious, primal.” He traced a finger along her bottom lip. “That’s how you take it.”

It has been a long time since I have read a novel that includes the total realm of emotions. This book has it all – desperation, passion, humor, fear, anger, despair, love, lust, sadness, euphoria and oh so many more. I was pushed almost to the point of emotional overload, but in such a good way. Just as Marcus described Jax as a “wild roller coaster ride” in the excerpt above, the entire book is a wild roller coaster ride. One moment I was clutching the book while my heart pumped furiously over some high anxiety scene and then the next moment I was sighing over the love shown by Marcus and Jax.

While this book is full of action, filled with suspense around every corner and will have you wondering what the heck could possibly happen next, what I enjoy most is seeing the emotional growth of Jax and Marcus. Both of these characters have been dealt a pretty bad hand in life, but through each other they find joy, happiness and peace from their pasts. One of my favorite scenes is when Marcus and Jax make love. As their foreplay progresses, Marcus senses Jax tense up and appear frightened.

But instead of taking her, he kissed her. He took her face into both of his hands, lowered his lips to hers, and, in a light, almost reverent way, he kissed her. The gesture nearly did her in. Anger, embarrassment and a dawning sense of gratitude for his consideration overwhelmed her. She felt the hot sting of tears in her eyes. Desperately she tried to stay them, but they leaked out.

The sweetness of this scene is astounding and it still touches the corners of my heart when I read it.

This book is the first in the L.O.S.T. series. I am really looking forward to reading about the guys of the L.O.S.T. organization and seeing each of them achieve their happily ever after.

Enemy Lover is a heart-racing, adrenaline-pumping, muscle-tensing, mind-whirling story that takes your heart, mind and soul prisoner and doesn’t free you until the very last sentence. If you haven’t figured it out by now, I LOVED this novel and suggest to EVERYONE -- go get it!