Review -- A Season of Seduction 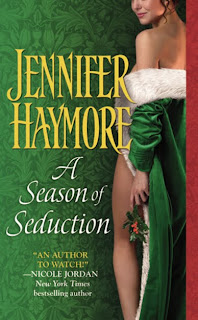 Lady Rebecca Fisk’s disastrous marriage came to an abrupt end four years ago when her husband, William, was killed. Becky wasn’t distraught, but relieved when it happened as her husband had manipulated and deceived her and had ulterior motives (her money) for wanting to wed her. Ever since, Becky has had no desire whatsoever to marry again, but that doesn’t mean she does not want to experience a man’s touch. When she meets and gets to know the rugged Jack Fulton, she believes she is ready to take that small leap. While taking that compromising leap, they are discovered by her overly protective brother, the Duke of Calton, and the only option is for them to wed. Except, Becky refuses Jack’s offer citing that she’s been down that road before (entering marriage impulsively) and has no wish to go down it again. However, Jack is persistent and begins to court her in the hopes that she’ll change her mind.

After twelve years away at sea, Jack Fulton returns to his homeland, the place he has missed immensely after being exiled by his family due to an egregious scandal. Upon his arrival home, his past is thrust back in his face in the form of blackmail by a childhood friend. Jack must pay him fifteen thousand pounds before Christmas or he will reveal the truth of what happened that fateful night over a dozen years before. The only way Jack can come up with that kind of money is to marry an heiress. He feels an instant kinship of sorts when he meets the Lady Rebecca. He observed her at the British Museum and saw something in her that reminded him of himself. Something solitary and isolated. What starts off as nothing more than a means to an end turns into something much more as Jack falls hard for the enchanting Becky. But will she forgive him and look beyond his past when the truth comes out?

A Season of Seduction picks up years after the previous books, A Hint of Wicked and A Touch of Scandal, and is the story readers have been anticipating featuring Garrett’s younger sister Becky. After her husband died, Becky devoted herself to her family and reading books and has become quite the bluestocking since last we saw her. Yes, she bears a wounded heart, thanks to her despicable husband, and even though she knows that Jack isn’t cruel like William was, she is still hesitant to marry so quickly. Totally understandable. And naturally, Jack feels horrible that he is deceiving Becky as William did. Though unlike William, Jack actually has strong feelings for Becky.

She’d been beaten down by her husband, and that made her tentative and hesitant, fearful of setting herself free, of opening her heart. She believed she couldn’t survive being hurt again. Jack understood completely. He’d been in that same place for many years after Anne’s death.

He wouldn’t let anyone hurt her. Never again.

They are splendid together and their romance is very sweet despite Jack’s secret looming in the background. A Season of Seduction is a nice, solid romance and a great addition to Jennifer Haymore’s repertoire. And it’s one that I recommend!