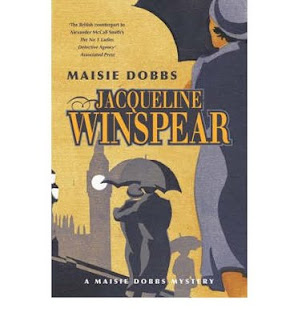 I've got a real treat for you today! The Maisie Dobbs novels by Jacqueline Winspear.

This last twelve months or so, I've been reading out of the romance genre, although I still love my romances. A genre I've discovered and absolutely fallen in love with is historical mysteries.

Back in my 20s, I read a lot of mysteries, mainly British stories like P.D. James or Golden Age fiction that now SEEMS historical, although it was contemporary when it was written, like Ngaio Marsh and Georgette Heyer and one of my all-time favorite writers (who I really should do a second helping on at some stage), Dorothy L. Sayers. By the way, if you're looking for a great romance plot, you can't go beyond DLS's Peter Wimsey and Harriet Vane. Breathtakingly emotional, packed with conflict and with a lovely sigh-worthy conclusion. 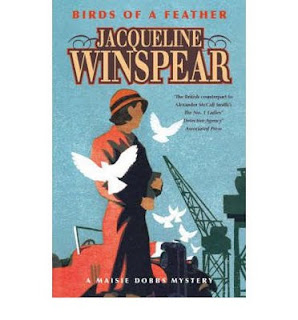 So far, my two favorite discoveries in the historical mystery genre are the charming Daisy Dalrymple stories by Carola Dunn (reviewed on the Romance Dish here) and the much darker Maisie Dobbs series.

They make an interesting compare and contrast exercise. Both take place in Britain in the shadow of World War I. Daisy is set in the 1920s and Maisie (hmm, this is starting to sound like a Dr. Seuss! Does Daisy drive you crazy? And Maisie is so hazy! And I only like my eggs green, thank you very much) in the 1930s. Both use their setting brilliantly and have an authenticity of tone that make you immediately believe these two women are products of their time and society.

The books are markedly different as well. Daisy is a viscount's daughter and there's a lovely, sparkling roaring 20s feel to her stories, whatever dark shadows murder casts upon proceedings. There's also a slow-building and very sweet romance with Scotland Yard inspector Alec Fletcher in the DD books. Daisy's books in many ways hark back to that classic Golden Age of detective stories so we get country house murders and lots of funny, eccentric characters. While somebody dies in every book (usually more than one someone), it's usually easy for the chambermaid to clean up the few drops of blood before high tea is served on the terrace. 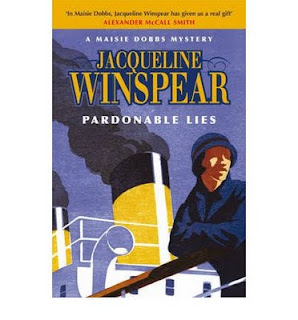 Maisie, on the other hand, is a working-class woman who rises to success because of her exceptional intelligence and special gifts. Because in many ways, she's classless in a class-ridden society, she moves easily between the slums of London and the highest of high society.

Book one, MAISIE DOBBS, is as much Maisie's biography as it is a murder mystery. Flashbacks guide us through Maisie's life as she works as a maid in a grand house where her employer recognizes her potential. We then learn about her time as a scholarship girl at Cambridge and, most harrowing of all, her experiences as a nurse in the trenches in World War I. In France, Daisy experiences love and loss and she returns to England after the war ready to seize her destiny and devote her talents to her work as a psychologist and investigator. 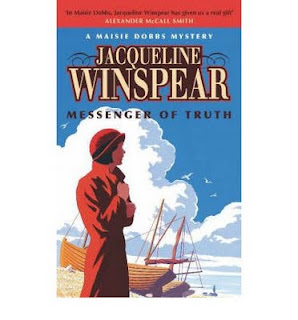 The next three books are much more conventionally structured although I'd definitely recommend reading them in order because revelations about the characters are carefully placed. Maisie takes on clients who present her with a mystery and through ingenuity and courage and perception, she solves them.

Book two, BIRDS OF A FEATHER, starts out as the search for a missing heiress and ends up uncovering a web of evil stretching across all levels of society. Book three, PARDONABLE LIES, forces Maisie to face her painful memories of France when she sets out to discover the truth behind the death of a pilot in World War I. Book four (one of my favorites of the series), MESSENGER OF TRUTH, puts Maisie in an artistic milieu as she investigates the supposedly accidental death of a controversial artist.

There are romantic subplots in all these stories but I certainly wouldn't describe them as romances. The most fascinating element is Maisie herself, continually testing the extent of her gifts. She's a fascinating character, not least because she possesses an uncanny intuition that occasionally adds a mystical dimension to the stories.

She's surrounded by a cast of regular characters who are all fully drawn individuals and a major part of the series' appeal. Maisie's costermonger dad is a real charmer. There's Lady Rowan Compton, her employer and later friend, who recognizes the potential in her chambermaid. Simon Lynch, Maisie's doctor fiance in the first book. Billy Beale, her assistant who lives through a complex character arc of his own. Her mentor Maurice Blanche who helps her identify and control her gifts. When you read a Maisie Dobbs novel, you enter a real, richly textured world that is addictive.

These books aren't exactly standard romances but they're wonderful and complex and different and beautifully written. Highly recommended!