On Second Thought - - A Rose for Maggie 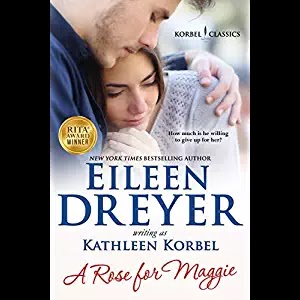 River Roads Publishing, a small, regional company, has scored big with the Binkley Brothers series, children’s books written and illustrated by L. Wood Dowd. The head of PR is eager to seize the moment and have the popular author touring across the country, but Dowd, an obvious pseudonym, zealously protects his identity.  The publishers know only his post office box number, the sound of his answering machine, and the skill of his lawyer. Allison Henley, Dowd’s editor, is assigned the task of tracking down the man behind the name. She is uneasy about the task, believing that Dowd has a right to his privacy, but with her job at stake, she feels that she has little choice but to comply. A single mother with a special needs daughter, she needs her job because it allows her the flexibility to earn a living and still be there when her child needs her. Thus, after some clever detective work, on a spring day, she prepares to meet Dowd, one Joseph Burgett, at his home. Allison’s image of Dowd as a white-haired cross between Mark Twain and Santa Claus is shattered the moment she meets the real Joe.

Joe Burgett is a man happy with his life. He is a carpenter who takes pride in his work and enjoys being one of the guys. He is an indulgent uncle who delights in the nieces and nephews with which his many siblings have obligingly provided him. He is a musician who plays a mean saxophone. His success as Dowd has allowed him to buy an old Victorian house he has coveted since childhood. He knows that he cannot preserve his anonymity forever, but he is reluctant to have fame change his comfortable life. Regardless of his reservations, he can’t resist Allison, the pretty, cautious young woman who has him thinking that his plans for someday may have shifted into present tense.

Allison is no less attracted to Joe and the more she sees of him, the more irresistible she finds him. But Allison has determined that there is no room in her life for romance. Her first priority is Maggie, her beautiful six-month old daughter who has Down syndrome and a heart defect that threatens her life. If Maggie’s own father could abandon her four days after her birth, unable to deal with an imperfect child, how can Allison expect another man to accept Maggie? Joe falls more and more in love with Allison and with adorable Maggie, but can he deal with the challenges that come with loving this mother and daughter? And can he persuade Allison that what they can be together is worth the risk to her heart?

I almost danced with joy when Eileen Dreyer announced that she was reissuing the books she had written as Kathleen Korbel. I eagerly downloaded them as they were released and waited for my favorite, A Rose for Maggie. This book has been on my keeper shelf and on my list of all-time best romances since the summer in 1991 when I first read it. I have reread it countless times since and loved it more with each rereading. For more than twenty-five years, it has been one of the books I cite in my response to those who ramble on about the limitations of romance.

Korbel/Dreyer takes on a tough subject and presents it with clarity and empathy. Allison and Joe are deeply human characters who are confronted with real problems. They are likable, even more so because they are not perfect. Allison, whose devotion to Maggie is genuine and powerful, is torn by fear and guilt. Joe has to ask himself not only whether he can be a father to Maggie but whether his love for Allison is great enough to surrender some of his own dreams. This novel not only touches the reader’s heart; it also pushes her to think some long thoughts.

Allison is both strong and vulnerable, and her anguish and conflict pack a huge emotional punch. Joe is quite simply one of the best heroes ever—smart, funny, loving, honest, generous, and all the other qualities that are most essential in the catalog of heroic qualities. I don’t think it is mere coincidence that this Joseph is a carpenter who commits to loving and rearing a child that is not his own. Yet sainthood aside, he is real. Maggie is not just a generic baby with a problem. She is a definite person in her own right. Lucille, who helps care for Maggie, and Joe’s large, loving family are also deftly drawn. Even the Binkley Brothers, the monsters who inhabit Joe’s books and whom the reader meets in excerpts, are memorable. And the ending is perfect.


A Rose for Maggie won a Rita in 1992, and it won a permanent place on the best of romance list of many readers. To say I highly recommend this book feels like an understatement. If I could send you all copies with a message saying “Please read this. You will be glad you did,” I would do so. If you have not read it, I hope you will. If you have not read it recently, it is well worth a reread.