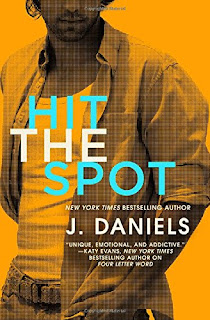 Tori Rivera thinks Jamie McCade is rude, arrogant, and worst of all . . . the sexiest man she's ever laid eyes on. His reputation as a player is almost as legendary as his surfing skills. No matter how her body heats up when he's around, she's determined not to be another meaningless hookup. Jamie McCade always gets what he wants. The sickest wave. The hottest women. And Tori, with her long legs and smart mouth, is definitely the hottest one. He knows Tori wants him-hell, most women do-but she won't admit it. After months of chasing and one unforgettable kiss, it's time for Jamie to raise the stakes.Jamie promises that soon Tori won't just want him in her bed, she'll be begging for it-and he might be right. Somehow he's found the spot in her heart that makes her open up like never before. But with all she knows about his past, can she really trust what's happening between them? Is Jamie playing for keeps or just playing to win?

Hit the Spot by J. Daniels does just that and more. If you are looking for a read that is intense in both its heat index and characters, this one is for you. It is the second in J. Daniel’s series which means I have a book to catch up on and two more to look ahead to. Jamie McCade and Tori Rivera’s relationship is hot from the start but they don’t just stop at the sexual sizzle. Their banter and wit help to carry the story. For me any romance novel is less of a story if not for the main character's’ family and friends to see them through. Hit the Spot has a great group of friends and family who have one another’s back.

I would give this a 4 out of 5 stars for its heat and characters.