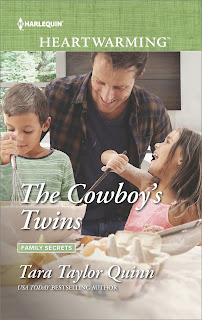 The only thing more important to Spencer Longfellow than making a success of his ranch is that he be the best dad possible to his seven-year-old twins, Tabitha and Justin. The lack of rain has left him with a cash flow problem, and that is the only reason he gives his reluctant consent for the cooking show, Family Secrets, to use his barn for a season of on-location shows. He intends to keep contact with the show’s creator, host, and producer, Natasha Stevens to a minimum. He has good reason to distrust “city girls,” and while Natasha and her crew may be invading his ranch for a period, Spencer is determined to keep them well away from his life, particularly his children.

Natasha knows the importance of keeping Family Secrets fresh. She believes the show will benefit from a season on a ranch that is a source of some of the world’s best beef and it doesn’t hurt that the ranch owner is a hunky cowboy sure to appeal to the women in her audience.  However, she doesn’t expect to become involved with the ranch and its residents. She is unprepared to ruin a pair of expensive boots assisting at the delivery of a calf or to be charmed by the lively Longfellow twins or to find Spencer Longfellow more intriguing with each encounter.

With Spencer’s dislike of city sophisticates and his plan to avoid Natasha and her crew and Natasha’s conviction that she is self-sufficient with no desire or need for long-term relationships, there should have been no problem. But the attraction between them is potent, and Tabitha and Justin are eager to befriend Natasha. Spencer and Natasha discover that plans, as poet Robert Burns famously said, go “agley.” Spencer’s effort to find himself wife who is at home on the ranch fails, and Natasha finds that she doesn’t understand her single mother and role model as well as she thought. However, there are hang-ups and secrets and misperceptions to be dealt with before this unlikely couple can find their way to an HEA.

This is the third book in Quinn’s Family Secrets series. Fans will be pleased to see Natasha get her own story, but readers new to the series will find that this novel works well as a standalone. It is a sweet story with the children providing light moments to balance Spencer’s angst. Readers will root for this deserving single dad and his twins to create a new family with the likeable Natasha. If you are looking for an easy, enjoyable read, The Cowboy’s Twins will fill the bill.