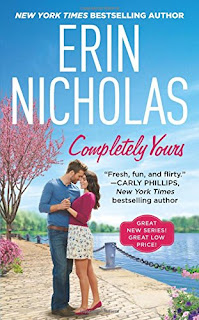 Completely Yours is book one in the Opposite Attracts series.

As the series title suggests, the hero and heroine, Zach and Kiera are complete opposites.  If they were both registered on Match.com there is not the slightest possibility they would have found each other.  However, an accident at the Convention Center brings these two face to face. Zach is one of the EMTs called to the scene, and Kiera is one of the convention goers trapped beneath debris, well actually the skirt of her costume is trapped.  He runs to her rescue - and that my friends is the beginning of one hot romance.

While there’s not a great deal of angst in this book, and I for one am a romance reader who says “Hallelujah”, because, personally I don’t enjoy too much torture in my romances, there is a push/pull in the plot and in the sex, and that’s what keeps you turning the pages.

While Zach is outgoing, Kiera lives her life mostly alone and on-line. Zach’s backstory is not a pretty one and is the contributing factor to his overwhelming feeling that he has to fix everything and run everyone’s life.  Kiera is a smart talented woman who doesn’t put herself out there and doesn’t think much of herself so she retreats to the on-line world where you can be whatever and whoever you want.  Zach’s outgoingness versus Kiera’s shyness is how the author cleverly created the tension in the relationship between the two main characters. He tends to be domineering in all his relationships, and maybe that’s a defense mechanism against what he’s been through, and she is a ‘hider’ living in a world on-line.

As a reader, Kiera’s character really worked for me. I enjoyed her dialogue and I appreciated her changes throughout the book. I felt she was a perfect metaphor for today’s society.  After all, don’t many of us kind of live on-line creating what we want the world to see – real or not?  So, there you have it.  Two people who need to peel back the layers, strip away the demons and find each other.  And find each other they do.


Do you think two opposites can last in a relationship?  Or is it better to find someone who is similar to you?