Review - - The Trouble With Dukes 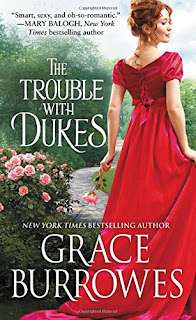 Hamish MacHugh, a former colonel and the new Duke of Murdoch, is uncomfortable with his title. The Scotsman is even more uncomfortable in London where he is ignorant of the conventions of the society in which his title places him. His bluntness, his disdain for social games, and the psychic wounds of war make him an ill fit for rigid Regency society. As if his awkwardness and social errors were not enough to make him the talk of the ton, a nickname from his war service, the Duke of Murder, adds to the unwelcome attention. Only Hamish’s fondness for his siblings, brother Colin and sisters Edana and Rhona, and his promises to them keep him in London. When he meets Miss Megan Windham, he acquires another reason to prolong his stay.

Megan Windham, the granddaughter of a duke, is the third of the four red-haired daughters of Anthony Windham, younger brother of the Duke of Moreland. An observant, intelligent young lady, Megan sees beyond the awkwardness and rumors to the honorable man that is Hamish MacHugh. At their first meeting, he saves her spectacles--and her--from the malicious intent of Sir Fletcher Pilkington, a man Hamish has reason to know is not the gentleman he sometimes appears to be. A younger Megan, infatuated with the handsome, superficially charming Pilkington, unwisely expressed her feelings for him in a series of letters. Pilkington, in need of funds to maintain his lifestyle, decides that Megan’s dowry will serve his needs and is using the letters to blackmail Megan into accepting his suit. Megan is reluctant to appeal to her family for help because she fears jeopardizing not only her own reputation but also the reputations of her three sisters.

Megan offers to help Hamish learn the social skills he needs to function in society. The attraction between the two intensifies as they spend time together. Hamish suspects that Pilkington makes Megan uncomfortable, and Megan confirms his suspicions when she confides in him and solicits his help. Hamish is happy to help her, but the gossip about his violence and disregard for orders, fanned by the determined Pilkington, magnify the Scotsman’s haunting questions about his choices and about whether he can be the man Megan deserves.

Despite a plot that is distressingly thin in spots, this first Windham Brides book will delight fans of Burrowes’s popular Windham Family series. This author excels at creating endearing, engaging characters, and The Trouble with Dukes offers not only an immensely likable hero and heroine but also the added charm of the Windhams en masse. Megan and Hamish’s is a quiet romance that develops organically in a fashion appropriate for these sensible and deserving protagonists, and it is enhanced by family members who have roles to play.

I confess my frustration with the convenient journey to Wales of Megan’s parents and Megan’s refusal to confide in her powerful family (although she must have known that Pilkington would be no match for her Uncle Percy and his assorted sons and sons-in-law), but it melted in the presence of some of my favorite characters in historical romance. Of course, the Duke of Moreland, Westhaven, and St. Just are not content to be merely present, and the Duchess has opportunity to display her abilities as well. One of my favorite things about the book is that the reader sees Hamish tested, proved worthy, and welcomed into the Windham brotherhood. The loyalty, affection, and relentless teasing that is male bonding at its best is one of the strengths of Burrowes’s world.

If you read and loved the original Windham books or if you have ever wandered into the world of Grace Burrowes and been captivated by the intricate connections that link characters, I think you will enjoy this book. If Burrowes is a new author for you, be prepared to be inundated with appealing characters. You may feel a bit overwhelmed at times, but if you like historical romance that is light but not frothy, rich in worldbuilding, and peopled with characters who will find a place in your heart, I predict you will like this book so much that you will be adding more Windham titles to your TBR.