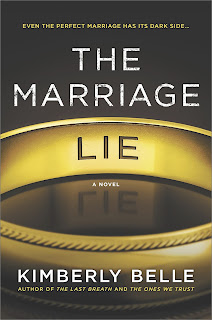 Some people seem to lead golden lives. Iris and Will Griffith were among this group. They enjoy their jobs, Will as a computer scientist and Iris as a counselor at an exclusive private school. They have a lovely home in an upscale Atlanta neighborhood, and seven years and one day into their marriage, they remain passionately in love. They have just decided that it is time to try for a baby. When Iris hears the news that Flight 23 from Atlanta has crashed with all 179 passengers presumed dead, she is sick with dread until she learns that the plane was bound for Seattle rather than Orlando where Will is headed to speak at a cyber-security conference. A few hours later, she finds that her relief was premature. William Matthew Griffith is listed on the passenger list of Flight 23.

Stubbornly refusing to believe that Will could have been on the plane to Seattle, Iris furiously begins checking, only to find not only was Will a no-show on the Orlando flight but also that the conference he was supposed to be attending did not exist. Will’s lies included a fake four-color flyer for the conference that never was. This is just the beginning of the inconsistencies that Iris begins to uncover. Items such as a recent will and life insurance policies totaling $2.5 million raise more questions. When a friend of Will’s, of whom Iris has never heard, tells her that Will had a job interview in Seattle but the Seattle office denies any knowledge of Will Griffith, Iris knows that she must find the truth. She and her twin brother fly to Seattle to begin their investigation. Everything Iris thought she knew about her husband turns out to be fabricated, and every truth she finds suggests that the real Will was a very different man from the one she knew and loved for seven years. Iris needs answers to all her questions, but each fragment of the truth merely raises more questions. Was her husband a liar, a thief, and perhaps a murderer? Who is sending her anonymous texts? Who is threatening her life?

I should probably give this book two ratings. Responding as objectively as possible, I must say that The Marriage Lie is a well-written, compelling psychological thriller that offers a layered mystery that challenges the reality of what appeared to be a happily-ever-after story and leaves the reader with questions about what marital love is and is not. Iris is an immensely sympathetic character and her grief is real and painful. Since the reader sees Will through her eyes, she/he is as confused and frightened as Iris is by the two Wills. The secondary characters are vividly drawn, particularly Iris’s brother and parents and the lawyer who is another victim of the plane crash. If I were a reader who loved such tales, I’m fairly certain that I would give the book five stars.

But I am a wimpy reader who prefers my mysteries cozy and habitually avoids psychological thrillers. I once rushed Nora Roberts’s Divine Evil to the UBS because it gave me the creeps to think about the book mixed with my beloved Roberts keepers. My favorite romance reads have a guaranteed HEA, and if they have an epilogue that includes tender scenes with babies, I smile as I sigh with satisfaction. I had to force myself to finish this book because I had committed to a review. Otherwise, it would have been a DNF for me about a third of the way through it when I realized it was not going to be another women’s fiction tale about a husband’s secret life and a new love for the heroine. I usually don’t rate DNFs, but if pushed, I would have awarded this one three stars for likeable characters whose lives I’d rather have seen move in a different direction. My conflicted response explains the four-star rating.


My recommendation is also two-pronged. If you like psychological thrillers, this one is skillfully executed with interesting characters and twists and turns aplenty. I highly recommend it. If your preferences are closer to mine, you probably want to skip The Marriage Lie.