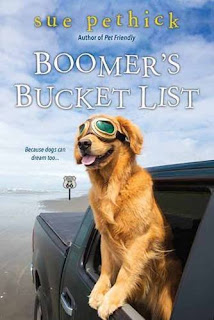 A former model, Jennifer Westbrook is currently an award-winning account executive at a successful Chicago PR firm. Totally immersed in her work, Jennifer doesn’t have much of a life outside the office. That changes on the day her dog Boomer, a yellow lab/golden retriever mix is diagnosed with hypertrophic cardiomyopathy and given a month to live. Boomer entered Jennifer’s life five years ago, the summer she turned thirty, finalized her divorce, and started her PR job. From the time Boomer, with all the adorability of puppyhood, picked Jennifer as his person, he has been her best friend. Devastated by the vet’s diagnosis, Jennifer takes a month’s leave of absence from her job and plans to spend it with Boomer doing something he loves. After some thought, Boomer’s love of cars generally and of his favorite toy, a squeaky Lightning McQueen, particularly inspire her plan of a road trip on Route 66, checking out all the scenic attractions that might appeal to Boomer.

Their first stop is the Chicago Speedway where her boss has arranged for Jennifer and Boomer, disguised as a blind woman and her service dog, to watch races from a client’s VIP box. When Boomer escapes from the box, Jennifer fears their cover is blown and they will be kicked out, but a strange man with whom Boomer immediately bonds comes to their aid. The man is Nathan Koslow.

Nathan is a Chicago Tribune reporter whose life has taken a downturn. He has lost his column and has been reduced to writing filler human-interest stories. On the personal side, he is still bothered by a bitter breakup. When his older brother, a successful producer of low-grade horror movies, buys a Mustang GT and asks Nathan to drive it to California and Nathan’s editor agrees to give him the time off if Nathan foregoes his planned drive via interstate highways and instead takes Route 66 and writes about what he sees.

After Jennifer and Boomer coincidentally meet up with Nathan a couple of times, they decide to travel together. Meanwhile, what started as a co-worker’s sincere tribute to Boomer has been turned into a slick PR web page called Boomer’s Bucket List. Boomer’s last journey tugs at heartstrings, and dog owners who have lost their own pets feel compelled to share their stories on the site. The outpouring of affection and attention is greater than anyone imagined and Boomer  has become a star. Jennifer knows nothing of what is going on, but Nathan’s suspicion that she is exploiting the situation leads to an angry parting. It takes a crisis in Boomer’s health to bring them together again.

Seeing Boomer’s joy in all the places Jennifer and Nathan find for him to visit will evoke smiles, but be prepared for tears as well since the first vet’s diagnosis is an accurate one. If I were rating this book strictly as a romance, it would be a three-star read. I thought Jennifer was a sympathetic character, but Nathan’s cynicism made him a difficult character for me. I found the romance less than engaging. However, Boomer was the real star of the story, and as the tale of a woman and her dog, I found the book a stronger story. It is sweet and touching and an accurate portrayal of the place a dog can claim in the life of his person. If you are a dog lover, Boomer and his book will steal your heart.