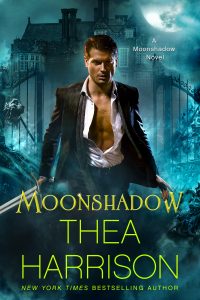 Thea Harrison is a familiar name to readers of paranormal romance.  For the last several years, she has published a series called The Elder Races that centers on the New York Wyr headed by Dragos, the world’s only dragon shifter.  Moonshadow is set in the Elder Races world but pivots to the Old World, England, with a new cast of characters.  Moonshadow is not only the title of this book but the name of this new series.

The heroine, LAPD witch consultant Sophie Ross takes a leave of absence and goes to England to seek answers about her mysterious childhood.  Adopted at age five, she knows she’s part Wyr but doesn’t know what kind of creature is the nonhuman part of her.  Her trip is spurred by an offer from the daughter of the man who rescued her after her parents’ deaths.  If Sophie can get into a house long owned by that man’s family, she’ll own the house and a substantial annuity.  Never having had a place to call her own, Sophie is doubly intrigued by this offer.

Getting into the house is not as easy as one might think, however, because it’s magically out of phase with this world.  No one has been able to enter it for a long time.

While in the UK, Sophie meets Nikolas Sevigny, a knight of the Dark Fae Court.  He and his handful of comrades are all that remain of a troop that was stranded on our Earth when a Light Fae sorcerer shattered the crossover passageway that led to their home of Lyonesse, a passageway that runs through the house Sophie has come to see.

Under attack by the Light Fae court, Nikolas and his friends can’t gather in one place for very long without creating an energy surge that allows their enemies to track them. He’s naturally domineering and brusque to the point of rudeness and doesn’t approve of people getting in over their heads, which he is sure Sophie has done.  He’s inclined to walk away--but she has skills that can be useful. And may be able to gain access to the passageway he needs.

Moved by Nikolas’s plight, Sophie agrees to help him and his friends, bartering for the magical skills she teaches them.  As she and Nikolas work together, the attraction that sparks between them from the beginning grows ever stronger.  Unfortunately, Nikolas feels he has nothing to offer any woman while he and his friends are on the run from the Light Fae and can’t get home.

Brusque, domineering heroes are not my favorite kind.  I can’t warm to them unless they have some sort of saving grace.  In Nicholas’s case, his willingness to risk himself for the people in the nearby town, his loyalty to his friends, and his acceptance of Sophie’s calling him on his bossiness are endearing.  So is the humor in Sophie’s reaction to him, as she continually reminds herself not to kiss assholes but then can’t resist kissing him.  Such feelings require a deft authorial hand to avoid coming off as wishy-washy and inconsistent, and Harrison pulls that off beautifully.

Sophie finds an unusual ally in a stray dog she rescues her first night in the UK.  She also displays courage Nikolas finds foolhardy but has to admire when Light Fae agents attack the pub where she’s staying.

Nikolas’s comrades come off well though only one, Gawain, has a large role to play in the story. Presumably, they’ll be heroes in future books.

The pace at the beginning of the book is a bit slow, but it picks up on Sophie’s arrival in England.  Overall, an engaging, entertaining story with lots of emotional conflict and a nice balance of action.