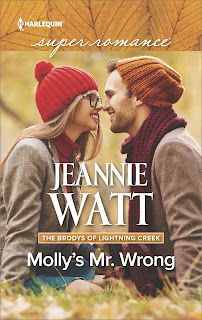 Molly Adamson remembers her time in Eagle Valley, Montana, as one of the few stable and happy periods of her growing-up years which were characterized by the frequents moves of her family. When a romantic relationship sours, she accepts a position as English professor at Eagle Valley Community College. Looking for a new start, she, along with her younger sister, Georgina, moves to the town she remembers fondly.

Finn Culver has also returned to Eagle Valley after a long stint of military service, but he finds that the changes that have taken place in him during his time away from his hometown make him ill fitted to spend the rest of his life managing the family feed store. When he considers what he wants to do instead, he remembers how much he enjoyed teaching recruits and decides that he would like to become an industrial arts teacher at the high school level. He knows that he will need a college degree, and taking core courses at the local community college seems a logical start. He enrolls for two courses, math and English.

Molly and Finn have a history. Their mothers conspired to have Finn, a popular athlete, escort nerdy Molly to the homecoming dance. It was a miserable experience, especially for Molly, who had a crush on Finn. She is humiliatingly aware of her “mercy date” status and of Finn’s rush to get her home as early as possible. A first meeting of the adult Molly and Finn awakens her memories of that painful experience and makes her determined to avoid Finn in the future.

To everyone’s surprise except the reader’s, Molly and Finn next meet in Molly’s composition class where Finn is a student. Finn finds his first writing assignment a real challenge, but even so, he is not prepared for the low grade he receives or for all the red ink with which Molly decorates his paper. Convinced that Molly’s harshness is in retaliation for an old offense, he is even less prepared for her suggestion that he may be dyslexic and spurns her offer to help him. When he reconsiders and accepts her help, the two develop feelings for one another that are more than the friendship Molly claims she wants. But As Molly’s student, Finn is off limits as a romantic interest, and a disgruntled student from an influential family will use all the ammunition he can find to create difficulties for Molly. Can they overcome these obstacles?

My reactions to this book were mixed. I liked the community college setting, and Molly and Finn are likable, sympathetic characters. Molly’s past and her recent bad breakup make her especially vulnerable, and Finn’s struggle with a learning disability that threatens his image of himself exposes his vulnerability as well. The secondary characters, particularly Finn’s grandfather and Molly’s sister, add interest to the story. Best of all, Watt is skillful at revealing the extraordinariness of ordinary people, something I really enjoy.

But I have problems with the relationship between Molly and Finn developing as it does while Finn is still her student. They are consenting adults, and I know the heart is no organ of reason. However, the taboo against student-teacher romances exists for a reason. In addition to the ethical objection, there is the practical concern that Molly is risking her career. I would have liked the book much better had Finn withdrawn from his English class before they became sexually intimate. This struck a nerve with me as a veteran of decades teaching classes similar to the one in which Molly teaches Finn, albeit not in a community college. As much as I liked parts of this story, in the final analysis, I could not move beyond these concerns and give the book a high recommendation. Jeannie Watt is a fine writer whose books I have enjoyed, and I am a big Superromance fan.  I look forward to other Superromances, including Watt’s novels.