I'm delighted to welcome Madeline Martin back to The Romance Dish today. Her newly released book, Highland Spy, checks all the boxes on my Medieval era, historical romance reading list. I read it in one day and am already eagerly anticipating book number two! Madeline is a USA Today Bestselling Author who lives in Jacksonville, FL (shout out to my former home city! with her two daughters and menagerie of pets. Her hobbies include rock climbing, running to Mud Runs, and just about anything exciting she can do without getting nauseated. She grew up in Europe and still enjoys traveling overseas whenever she can find time to get away. Her favorite place to visit thus far: Scotland. Prior to Highland Spy, she authored three Scottish Historical novels: Deception of a Highlander, Possession of a Highlander, and Enchantment of a Highlander. Visit her website at www.madelinemartin.com and connect with her online at Facebook and Twitter.

Welcome, Madeline! Congratulations on your new book! I’m a huge fan of Medieval romance stories, especially when set in Scotland which, of course, has me very excited about this new series. What would you like readers to know about your Mercenary Maidens and their journeys to love?
Thank you so much for having me here today, PJ! J And thank you for being so excited about my upcoming series. I think the most important thing I want people to get out of the Mercenary Maidens series is that these are ordinary women who face extraordinary circumstances and get a second chance at life. Through the education of their skills, they find something many of them were lacking before going to Kindrochit Castle for training – their confidence. They’re empowered not only by what they’ve learned externally, but what they’ve discovered internally. I feel like that’s so indicative of us as women. Hard times can bring difficult lessons, and we typically emerge tougher and with a stronger knowledge of who we are – and we’re better for it. These girls are all the same.

What was your inspiration for these female warriors?

My initial inspiration was Mariel Brandon - the heroine from my debut release, Deception of a Highlander. I enjoyed writing her character as a spy so much, I was craving to write another series about a group of women who were all spies. After that, I did some research on female spies in history and came up with some pretty incredible women to inspire me. There have been so many women through history who have sacrificed so much – their families, their freedom, even their lives – for their countries and/or what they believe in. It was easy to write strong women with such shining examples.

Highland Spy (Jan. 10) kicks off the series. What should readers expect from Ariana and Connor’s story?

A lot of action, adventure, and a love that builds as two lost souls come to fully appreciate and             really understand one another. Also, some really kickass women. ;)

You visited Scotland last year. (I loved following along via your videos!) What was your favorite part of the trip? Will we see any of the places you visited in your upcoming books?

Thank you so much! The trip was just amazing. I got so many wonderful ideas, not just for the Mercenary Maidens series, but also for the idea brewing in my mind for my next series, the Jacobite Jezebels (yeah, I have a thing for alliterations).

My favorite part of the trip was going to Findlater Castle – it’s a ruined castle set on the coastline. We were cautioned to not bother wasting our time because it was ‘just a pile of rocks’. Well, that pile of rocks ended up being the coolest thing ever.

From far away, it was nothing to look at, true – but after following a narrow path down one very steep hill and climbing up the cliff, I found the pile of rocks were the still-intact walls of the castle. And further inspection found gaping holes in the back of the castle so I could climb down inside it. Seriously – it was my Indiana Jones moment. The ten year old in me was in the middle of Goonies crawling around down in those buried rooms, going down to the floors buried beneath the rubble and peering into rooms long since abandoned. It was the most amazing experience ever and made me so glad we’d gone to see that pile of rocks. ;)

One of the places we visited was Urquhart Castle, which you will definitely see in Highland Spy. It’s Connor’s family home, and one he hopes to recover.

I enjoyed watching Ariana discover her inner warrior. What new skill(s) would you choose to be inside you, awaiting discovery?

Oh, that’s a great question. I think I’d love to learn how to shoot a bow. It’s something I’ve always wanted to do, but is something I’ve never had the opportunity to try.

Your Highland Spy is on my 2017 Most Anticipated Books list. What books are you looking forward to reading this year?

Thank you so much – I’m honored to have made that list! J I confess due to my lack of free time, I listen to all my books. So the books I’m most looking forward to listening to in 2017 are: The Chemist by Stephanie Meyer, Right Behind You by Lisa Gardner, Into the Water by Paula Hawkins, The Map of Bones by Francesca Haig.

I don’t make resolutions but I do set goals at the beginning of each year. What are your goals for 2017?

I actually do something similar – goals are so much more quantitative and easily broken down than a blanket statement to alter something about ourselves. I have a spreadsheet of goals, but I’ll just highlight the main ones. First of all, I want to get control of my health again in 2017. After a very busy 2016, I found myself giving me permission to skip gym workouts and not eat as healthy as I was used to. I didn’t like the results. My goal for 2017 is to stay on top of my health with eating healthy and sticking with a stricter gym regimen I’ve implemented most of my adult life.

Regarding my books, I’ll be in three anthologies in 2017, so I’ll be writing and releasing those all in 2017. Additionally, I’m hoping to write the first two Jacobite Jezebels stories, and hopefully release at least two of my Mercenary Maidens books.

Any big trips planned for this year?

Yes! I’m so excited! I’m going to be one of the guest authors at the Historical Romance Retreat in Spokane, WA. I’ve already started shopping for historical gowns for it! Registration opens on January 10th for people who want to attend – more info can be found here: http://www.historicalromanceretreat.com

I’m also planning to attend the RWA National conference as well as RT in Atlanta. Also, the minions and I want to go to Asheville, NC to check out the Biltmore – we recently read Serafina and the Black Cloak and can’t wait to check out the estate!

What’s next for your Mercenary Maidens? Do you have a scheduled release date for Book #2?

There will be three books in total for the Mercenary Maidens (Highland Spy, Highland Ruse, Highland Wrath). I’m not sure on the release date for the second book yet. I actually just finished the third book – it’s with my beta readers and will soon be delivered into my publisher’s hands once I finish beta reader edits/suggestions.

It’s been a pleasure visiting with you, Madeline. Would you like to ask our readers a question?

Thank you so much for having me, PJ – it’s always a pleasure to be here. J

I’d love to hear from your readers about what they think their most empowering strength is. J

Readers, Madeline's publisher is giving away one print copy of Highland Spy to a randomly chosen person leaving a comment on today's post before 11:00 PM, January 13th. 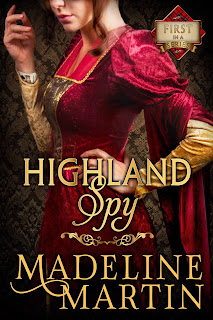 Connor Grant is in search of a lady. Not a bride, but a woman to become a skillful and seductive spy in the service of King James. In addition to being the King's personal assassin, Connor heads a group of female spies who aid him in his work, women with nothing left to lose.

Ariana Fitzroy is the perfect mark. Destitute, orphaned, and completely alone, she's missed her chance at an advantageous match at court and cheats at cards to survive. When Connor catches her in the act, he threatens to expose her, unless she joins his elite roster of spies.

She agrees and is whisked away to a deserted Scottish castle to begin her training. Ariana quickly takes to her lessons in seduction, deception, and hand-to-hand combat, but less easy to fight are her feelings of lust toward the ruggedly handsome Connor, feelings she suspects may be reciprocated.

When Connor recruits her help on a mysterious task, the pair must work together to track a dangerous target. But Ariana suspects Connor isn't telling her everything — not just about the mission, but also about his past. Will the secrets between them threaten their mission? And will they be able to fight their attraction as they wonder who they can trust?

ORDER THE BOOK
Amazon
B&N
Add to your Goodreads shelf!