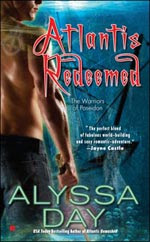 The Warrior's Creed
We will wait. And watch. And protect.
And serve as first warning on the eve of humanity's destruction.
Then, and only then, Atlantis will rise. For we are the Warriors of Poseidon, and the mark of the Trident we bear serves as witness to our sacred duty to safeguard mankind.

Atlantean warrior Brennan was cursed millennia ago by Poseidon to live his life without experiencing any emotions. When he meets his true mate, all of his long-denied emotions will rush over him all at once. And, to quote Poseidon:

"If that alone is not enough to destroy you, you will also be cursed to forget your mate whenever she is out of your sight. Only when she is dead--her heart stopped and her soul flown--will your memory of her fully return to you, thus allowing you until the end of your days to repent bringing dishonor upon the name of the Warriors of Poseidon."

Brennan's curse comes full circle when he meets Tiernan Butler, an investigative reporter.... and his soul mate. She is also blessed with the ancient Gift of truth telling, instantly knowing when someone is lying. Tiernan is working with the Atlantean warriors to delve into the heinous experiments that human scientists are performing on shape-shifters. Tiernan goes undercover and meets Brennan at the Mammoth Hot Springs Hotel in Yellowstone National Park. While she is most definitely attracted to him--he's tall, dark, buff and incredibly handsome...who wouldn't be attracted?--Brennan is struck to the core with the knowledge that she is the one.

The face from those fragments of nearly forgotten dreams. He saw her face, and the entire world jolted and fell out of orbit. There was no sun. There was only her. Tiernan.

Tiernan is fighting her own emotional war. Instant attraction and desire for this sexy Atlantean and puzzlement at his behavior toward her, as if he'll die if he doesn't have her. And his absolute fear to be away from her for even more than a minute. But because of her gift of seeing the truth in others, Tiernan knows that Brennan is speaking the truth from his heart about his curse and why he believes she is his mate.

Tiernan and Brennan must work together to fight the evil that could spell the end for both of their worlds. Will they survive the battle or will Poseidon's curse be the end of their potential happiness?

Ms. Day blends action, suspense and fiery hot sensuality to create another winning book in her Warriors of Poseidon series. This is the first one that I've read-- but the fourth in the series-- and while I like to read a series in order, I had no trouble jumping right in to the story. Brennan is my favorite kind of hero: tall, dark, gorgeous and emotionally wounded. There's nothing better than watching a tortured hero--and is he ever tortured!--healed by the love of the heroine. Tiernan and Brennan are a match made in heaven....or Atlantis. *g* Brennan's complete and utter love and devotion to Tiernan had me sighing through this entire story.

"You are more than I could ever deserve, Tiernan Butler," he said, his voice low and husky. "I will see you safely out of this hell if it is the last thing I ever accomplish in this life. You are mine, my revelation and my redemption, and I will never let you go."

So if you fancy a sexy, tortured hero, I highly recommend Atlantis Redeemed.