Review - Most Eagerly Yours 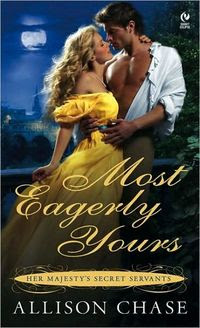 While the four orphaned Sutherland sisters were raised on their uncle's country estate they formed a close friendship with the young Princess Victoria. After the death of their Uncle Edward, the sisters move to a small town home in London and run The Knightsbridge Readers' Emporium. They live simply on the annuities left to them by their parents and uncle, away from the social whirl of high society. Just months before her coronation as queen, Victoria pays a secret visit to the sisters to ask for their help with a most delicate matter, acting as her secret servants.

As the eldest sister, Laurel is chosen first. Victoria asks Laurel to travel to Bath posing as a wealthy widow. Her "assignment" is to get to know George Fitzclarence, the queen's jealous cousin who has on occasion spoken treason. As the illegitimate, but only son of the late king, George feels that he is better than the young Victoria. Victoria cautions Laurel to beware of George's unscrupulous friends, particularly the Earl of Barensforth.

Aidan Phillips, Earl of Barensforth is an undercover agent for the Home Office investigating a financial scam mired in murder and alchemy and George Fitzclarence in the middle. The appearance of a lovely young widow distracts Aidan from his plans. He is sure that Laurel is hiding something, and he is determined to discover her secrets. But what starts as mere attraction quickly turns to something deeper. Despite their growing feelings for one another, neither Aidan nor Laurel think they have a future together. Yet love prevails and is beautifully shown when Aidan waltzes with Laurel under the stars with only the sounds of nature to provide the music.


And then the whirling stopped and all went still, the music coalescing into one long, beautiful, lingering note as Aidan bent his face over hers. At first she thought he would kiss her, but he only smiled into her eyes with longing and sadness and steely-edged resolve.

Her heart overflowed with all the love they would never share. "Why did you do that?"

"So that years from now it will be what you remember of this day. Not the disappointments or the heartache or my wretched failings, but the glory of commanding the earth to sing and the sky to dance. For you, Laurel. All for you."

And she realized that though he might not be offering her a happily-ever-after, he had already given her more than she had ever imagined.

Most Eagerly Yours is the first book of Allison Chase's Her Majesty's Secret Servants series. It is a delightful combination of romance, political intrigue, and mystery with a gothic touch. Book 2, Outrageously Yours, featuring Laurel's sister Ivy will be released in December. I'm looking forward to each book in this series, finding out more about the Sutherland sisters, the mystery that surrounds their parents' death, and the enigmatic "man in black." If you love historical romance with a years-long mystery yet to be revealed, I'm sure you'll enjoy Most Eagerly Yours.