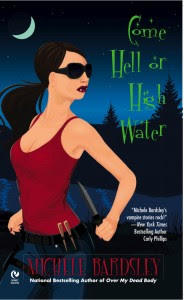 Phoebe Allen is a typical single mom; taking care of her four-year-old son Danny, managing the Old Sass Cafe in Broken Heart, OK, taking care of business from sunset to sunrise... Okay, maybe Phoebe is not so typical. She's a vampire. Her son is at Disney World with his human father, so Phoebe has a little more free time. Time to indulge her attraction for Scottish hunk, Connor Ballard. His charming brogue sets her undead heart all aflutter, but Phoebe knows they can't go "all the way" unless they want to be mated for the next century--vampire rules. But Connor tells her the law doesn't affect the Ghillie Dhu ( Scottish fairies), which he is, so Phoebe can't resist. And when they finally get up close and oh so personal, it's so hot that Phoebe's surprised she doesn't spontaneously combust. But when the post-coital glow dissipates, she discovers that Connor is not just Ghillie Dhu, he's also half demon...and now he's her mate. Talk about being up the river Styx without a paddle!

Connor wants Phoebe for his mate not just because he desires her, but because she is the only one who can help him defeat Lillith, his demon stepmother from Hell. Connor needs Phoebe to help him find the other half of an ancient talisman which will banish Lillith to the deepest pit of Hell, permanently. It will take all of his strength and cunning to keep Phoebe safe as they journey to the various levels of Hell to battle demons. Will that be enough to help them triumph over evil or will Phoebe and Connor have to learn to surrender to the love that is hidden deep in their hearts to truly win?

Connor is the ultimate bad boy. What half demon wouldn't be? But lurking beneath his tough exterior is a heart of gold with a soft spot for Phoebe. Unfortunately, Phoebe has trouble believing that Connor wants her for more than her necessary role in retrieving the talisman. She knows she lusts for Connor, but she takes much longer to realize that she truly loves him. I adore some of the lines where she recalls her deceased mother's advice about love:


I'd told her I couldn't wait to fall in love. And she smiled so sadly. "Love is a wonderful thing," she said. "It makes you feel like you can fly, like you can conquer the whole world. It can give you everything, and take it all, too."


And Phoebe begins to realize what love truly means with all that Connor does for her:

He cupped my face and gently brushed his lips across mine. It was such a kind gesture, one I didn't deserve when I'd been nothing but cruel. This is love, said my mother's voice, because love never turns away.


Come Hell Or High Water is the sixth book in Bardsley's Broken Heart series and as usual, it is filled with many laugh-out-loud moments. Phoebe is a smart-mouthed, kick-ass heroine with a weakness for bad boys, and Connor is perfect for her. Even if you haven't read the rest of this series--which I highly recommend that you do!--you can still enjoy this book. If you have a weakness for tortured heroes, especially devilishly handsome ones with Scottish brogues, then this book is for you!