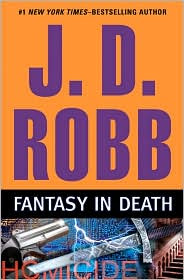 In the 30th book of J.D. Robb's In Death series Lieutenant Eve Dallas is facing one of the most puzzling and challenging cases of her career. Bart Minnock, founder of the computer gaming company U-Play, locks himself in his private holo-room at his home, ready to immerse himself in the ultimate gaming fantasy: assuming the role of a battle-hardened, sword-wielding hero defending his kingdom. This new game is U-Play's latest top-secret project called Fantastical and it could take the world of gaming to a whole new level.


The next day he is found in his still locked game room, decapitated. Security discs show that no one entered his home, no weapons are found and the only blood on the scene is the victim's. Eve must now begin the difficult job of discovering who murdered Bart and how. She decides to focus her attention on Bart's U-Play partners/best friends: Benny, Cill and Var. When she informs the three of them of his death, they are devastated and seemingly as perplexed as Eve about how Bart was killed. Everyone seems to have loved and respected Bart. But Eve has seen enough murder to know that even the most amiable people can have enemies.

Robb, aka Nora Roberts, continues to fascinate and entertain her readers with the latest installment of her wildly popular futuristic series. Friendship and its many faces plays a big part in this book. One of my favorite aspects of this series is the wonderful cast of characters and their interaction with each other. Robb really captures the nuances of the relationships of her characters. Of course, front and center are Eve and her sexy, compelling, sinfully wealthy husband Roarke. They are probably my favorite fictional couple, and even after 30 novels, their relationship is still as captivating as it was in the beginning. Eve is a kick-ass, tough cop, but she has a tender heart for those she loves and Roarke is the center of that.


Smooth and slow and sweet, they moved together. As sensations shimmered through her like light, she cupped his face in the dark.

Not all magic was fantasy, she thought. There was magic here and she felt it glow in her body, in her mind and her heart.

Magic, she thought, watching his heart rise into his eyes.


Roarke grew up on the streets of Dublin, scrabbling and fighting for survival, and through grit and intelligence he became one of the most powerful men on the planet. His complete and utter devotion to Eve never fails to move me.


Her strength, her valor remained a constant wonder to him, as did her unrelenting determination to defend those who could no longer defend themselves. These moments, when she allowed her vulnerabilities, her doubts, her fears to tremble to the surface compelled him to take care. In these moments he could show her it wasn't just the warrior he loved, he treasured, but the woman, the whole of her. The dark and the light.

Who wouldn't love a man like that or want to be loved so completely as Roarke does Eve and she him. While this is obviously a long running series with no apparent end in sight--hooray!--each book can stand alone. But be warned, once you enter the world of futuristic New York, you'll be hooked....and totally in love with Roarke!