Review - Chick With A Charm 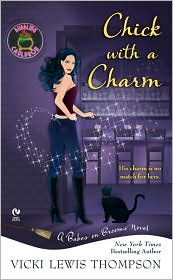 Free-spirited and vivacious, Lily Revere is a witch on a mission--which is bound to get her into trouble. Apparently she didn't learn from her sister Anica's magical screw-up (see book 1, Blonde With A Wand). But Lily is bound and determined to score a date for Anica's engagement party, and she's had her eye on sexy lawyer Griffin Taylor for awhile. Although, he seems to find Lily attractive, he's not making a move fast enough suit her. So Lily decides to brew a little adoration elixir to slip in Griffin's drink while she's tending bar at The Bubbling Cauldron. Using her loyal Golden Retriever Daisy's essence as part of the potion, Lily is convinced this will give Griffin the nudge that he needs. After all, what harm can a little magic do?

Griffin noticed Lily the first time he walked into the Bubbling Cauldron for happy hour with his law firm buddies. How he could he not notice the tall, brown-eyed, dark-haired temptress? But Griffin refuses to be controlled by his libido. No, not happening. After watching his parents go through a bitter divorce, he's not going to make the same mistake. He's only going to date a responsible and focused woman, no matter how much he wants Lily. But he can't help looking and fantasizing a little. Lily makes him an amazing Harvey Wallbanger for him--laced with a little adoration elixir--and he can't believe how great it tastes. After he leaves the bar, he can't get rid of the restlessness that comes over him and the overwhelming urge he has to see Lily.

Lily is beyond thrilled with the results of her elixir! Griffin can't get enough of her--in bed and out--and she's basking in his undivided attention. It's not long before reality rears its ugly head and bites Lily in the butt. Sooner or later, she'll have to tell Griffin about the elixir and then what? Will he still feel the same about her without the spell? Or will he run screaming when he discovers she's a witch?


Her plan had also worked well for her sex life. But her heart--her heart ached with the knowledge that she'd enslaved this man. Love from a bottle, so to speak, wasn't love at all. Sometimes she could almost convince herself that Griffin really cared for her, but as long as the spell was still in effect she couldn't trust any of his behavior as being genuine.

Vicki Lewis Thompson's second Babes On Brooms book is filled with her trademark humor. Like the first book, Blonde With A Wand (see my review here), Chick With A Charm made me laugh out loud a few times, especially when Griffin's friends decide to do some amateur sleuthing when they suspect that Griffin is not his normal self. If you like your paranormals with a dash of humor, this book is just what the "witch" doctor ordered.